It's a critical moment. ExxonMobil wants to restart offshore drilling in the Santa Barbara Channel, putting the California coastline at great risk of another massive oil spill. We’re not going to let that happen.

When Plains’ corroded coastal oil pipeline ruptured in May 2015 near Santa Barbara, it spilled more than 120,000 gallons of crude, killing hundreds of marine mammals and seabirds and blackening local beaches for miles. It also shut down the seven aging offshore drilling platforms it served. Four of those old platforms are being decommissioned — but ExxonMobil is making an aggressive push to bring the other three back online by trucking oil while they wait for Plains to rebuild its risky coastal pipeline. 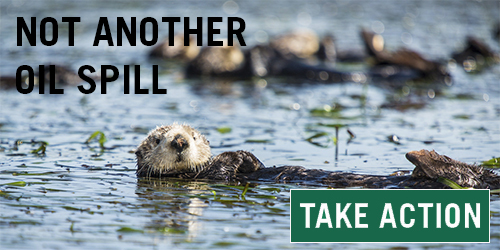 Tell Santa Barbara County officials that we don’t want dirty offshore oil — not in trucks, not through pipelines, not on our beaches.

Exxon is pushing to bring back offshore drilling from its three remaining platforms by trucking the oil along coastal Highway 101 and accident-prone Route 166 — 24 hours a day, seven days a week. Trucking oil puts public health and our environment at risk. Large trucks crash with alarming regularity, and that’s particularly dangerous when they’re transporting combustible crude. Just one accident could create a dangerous explosion or another oil spill into waterways along the route. Exxon’s trucking routes would pass through critical habitat for several endangered and threatened species, including red-legged frogs, California tiger salamanders and Southern California steelhead, which are highly sensitive to toxic crude oil.

Meanwhile, Plains is proposing to build a new pipeline that would endanger our beaches and wildlife again. The new pipeline would go through Santa Barbara, San Luis Obispo and Kern counties, transporting heavy crude pumped from offshore drilling platforms to onshore processing facilities. Plains Pipeline has a bad safety record and a history of violations. Indeed, in September 2018, a jury found Plains guilty of a felony for failing to properly maintain its pipeline and several misdemeanor charges for a delay in reporting the spill and for its deadly impact on protected wildlife. Federal data show pipelines are dangerous and prone to fail, particularly when they’re either old or brand new. Plains Pipeline doesn’t deserve another opportunity to damage our economy and despoil our coast.

We won’t risk our wildlife and coasts.

Both proposals would allow Exxon to restart their three aging offshore platforms in the Santa Barbara Channel. According to a 2015 inspection report, these platforms are corroded, have numerous components out of compliance, and have electrical issues — and that report was before they sat dormant in the wet ocean for several years. We can’t let these aging platforms threaten our ocean, wildlife and coastal community.

MAP OF WILDLIFE IMPACTS
Click the arrow on the left to see the legend.

Your support is crucial to our fight to protect oceans.

$15 $50 Other
Photo of oil rigs off California (c) Drew Bird; photo of sea otter by rwshea/Flickr