Primary threats to penguins include climate change and industrial fishing. 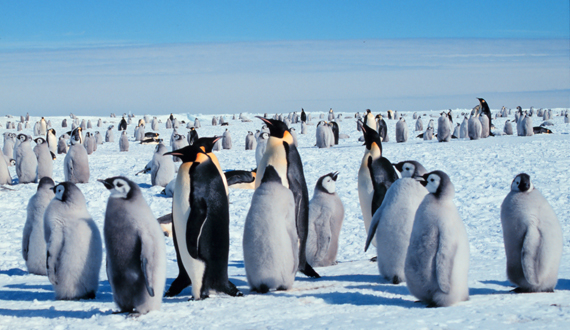 Like the polar bear on the opposite pole, the emperor penguin endures almost unfathomable hardships to breed and nurture each new generation — fasting for months through the planet's harshest winter weather, sustained only by stored energy from a long-ago feed from the sea. If its onshore waddle doesn't exactly confer nobility on the emperor, its remarkable underwater grace surely does. Yet this extraordinary bird faces new and extraordinary pressures — most ominously, the rapid acceleration of global warming. And the emperor is not alone: More than half of the world's 19 penguin species are in danger of extinction because krill, the keystone of the Antarctic marine food chain, has declined by as much 80 percent since the 1970s over large areas of the Southern Ocean. The chief culprit: global warming. Many penguin species also compete with industrial fisheries for food, and their survival and reproduction rely on a delicate balance, to which a single disruption can become catastrophic.

Determined to keep global warming from finally tipping the odds too heavily against the survival of the planet's penguins, the Center filed a scientific petition back in 2006 to gain Endangered Species Act protection for 12 of the most imperiled penguin species. Four long years (and several Center lawsuits) later, the Interior Department announced the simultaneous listing of five penguins as threatened under the Endangered Species Act: the Humboldt penguin of Chile and Peru, as well as four from New Zealand — the yellow-eyed, white-flippered, Fiordland crested and erect-crested penguins. Soon after, the African penguin was listed as endangered and the New Zealand-Australia populations of the southern rockhopper penguin were listed as threatened. After another Center petition, in 2014 the Fish and Wildlife Service announced that the emperor penguin might warrant Endangered Species Act protection.