GIVE TODAY
African penguins have pink glands above their eyes that become pinker as the penguin gets hotter. 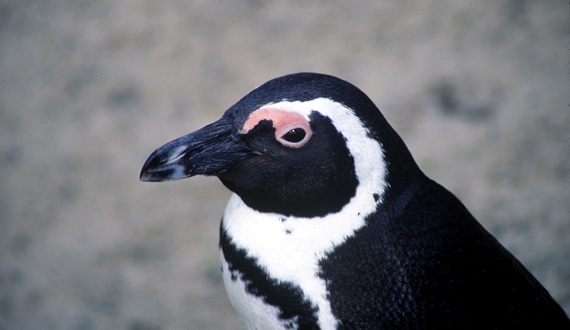 DESCRIPTION: This penguin grows to be about 26.5 to 27.5 inches tall and weighs between 4.4 and 11 pounds. It has a black stripe and a pattern of unique black spots on its chest, as well as pink glands above its eyes that become pinker as the penguin gets hotter. Males are larger than females and have larger beaks.

HABITAT: African penguins are usually found within 40 kilometers of the shore, coming onshore to a variety of coastal habitats to breed, molt, and rest.

RANGE: This penguin breeds on the African mainland from Hollams Bird Island, Namibia to Bird Island, Algoa Bay, South Africa. The species formerly bred at many additional sites but has been extirpated from much of its range. Range Map

MIGRATION: Juvenile African penguins tend to disperse along the coastline to the west and north. Birds regularly reach southern Angola and vagrants have been found off Gabon, Congo, and Mozambique.

BREEDING: Breeding takes place from May through August on rocky ground with little or no vegetation. These penguins excavate nest-burrows wherever possible, with guano being the preferred nesting substrate.

LIFE CYCLE: This penguin's average lifespan in the wild is 20 years.

THREATS: Global-warming-induced shifts in the marine and atmospheric environment are destructive to the African penguin's habitat and comprise a major threat to the bird. Global warming also intensifies the other severe threats the species faces, including guano and egg collection at breeding colonies, oil pollution, and commercial fishing.