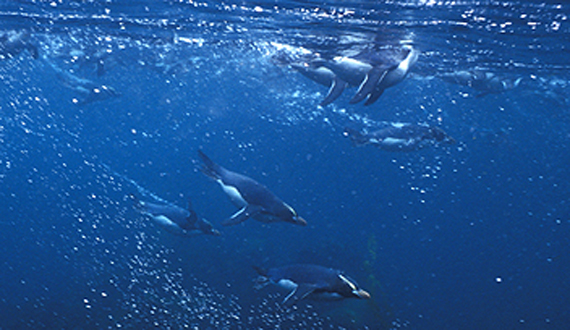 DESCRIPTION: This penguin is about 19 to 24 inches in length and weighs about 6.6 pounds. It has black upperparts, white underparts, dull red eyes, and a yellow crest beginning at the base of the bill, extending over the eye, and drooping down the back of the head. The bill is red, large, and heavily grooved.

MIGRATION: Snares crested penguins are not thought to range very far during winter, with virtually no sightings at sea away from the breeding islands. Molting birds have been seen ashore on Macquarie, Campbell, Antipodes, and Chatham islands, and birds are occasionally seen on beaches at Stewart Island and the South New Zealand mainland. One individual was recorded in the Falkland Islands.

BREEDING: This penguin breeds in forests in dense colonies from September to January, laying eggs in shallow nests of twigs and mud. Eggs are incubated by both parents for 31 to 37 days, and when hatched, chicks are raised and guarded for three weeks. About 75 days after hatching, chicks are able to go to sea.

THREATS: The Snares crested penguin is particularly threatened by global warming because of its restricted breeding range. Any reduction in prey abundance due to changing ocean currents or increasing temperatures as a result of global warming could drive this species to extinction. In addition, a large squid fishery competes directly with these penguins for food. The species is also threatened by oil pollution.

POPULATION TREND: The population of Snares crested penguins was estimated at 23,250 breeding pairs in 1985 and 1986, with 19,000 on North East Island, 3,500 on Broughton Island, and 750 on the Western Chain islets. Insufficient data exists to determine whether there is any trend in abundance.