GIVE TODAY
This bird is identified by its yellow eyes and the yellow band that rings its head. 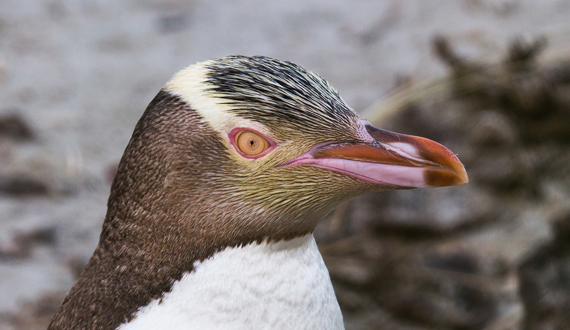 DESCRIPTION: A medium-sized penguin, the yellow-eyed penguin is between 22 and 31 inches in length and weighs 8 to 19.6 pounds. It has pale yellow eyes and its head is capped by yellow, with black-centered feathers bordered by a bright yellow band extending from the eye to around the back of the head.

HABITAT: Historical breeding habitat for this species was primarily in coastal forest and mixed-species scrub on slopes above landing areas. Very little coastal forest remains on the east coast of the South Island, where the bird must use scrub remnants, but forest remains the dominant habitat in breeding areas on other islands. The species forages over the continental shelf.

MIGRATION: Adults are sedentary, but juveniles disperse north as far as the Cook Strait.

BREEDING: Yellow-eyed penguins breed from August through March and lay eggs in shallow scrapes of leaves, grass, and twigs. Eggs are incubated for 39 to 51 days and chicks fledge at 106 to 108 days.

LIFE CYCLE: Males may not breed until they are three to 10 years of age, but females usually reach maturity earlier in life. The bird's average lifespan is 23 years.

POPULATION TREND: This species has declined by well over 50 percent in recent decades and now numbers fewer than 2,000 breeding pairs.