GIVE TODAY
This bird was named by English sailors for its sassy yellow crest. In 18th century England a "macaroni" was a man whose style was flamboyant and excessively ornamented. 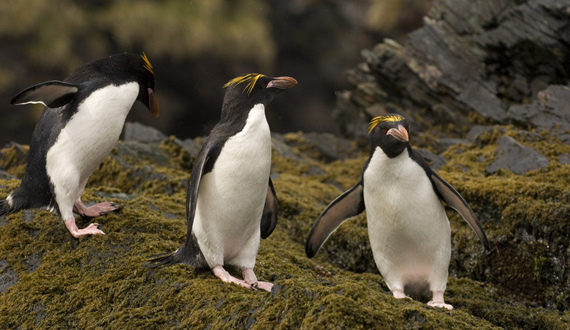 DESCRIPTION: The macaroni penguin averages about 20 to 28 inches in length and about 11 pounds in weight. It has black upperparts, white underparts, and distinctive yellow and black plumes on the top of its head. This species closely resembles the royal penguin, but has a black chin rather than a white one.

HABITAT: Macaroni penguins live in rocky, water-bound areas, on rocks and cliffs above the ocean.

RANGE: Macaroni penguins range from the sub-Antarctic to the Antarctic Peninsula. They breed in at least 216 colonies at 50 sites, including southern Chile, the Falkland Islands, South Georgia and the South Sandwich islands, the South Orkney and South Shetland Islands, Bouvet Island, the Prince Edward and Marion islands, the Crozet Islands, the Kerguelen Islands, the Heard and McDonald Islands, and very locally on the Antarctic Peninsula. While foraging, groups will range north to the islands off Australia, New Zealand, southern Brazil, Tristan da Cunha, and South Africa. Range Map

MIGRATION: Macaroni penguins are migratory and are rarely found near land during the non-breeding season.

BREEDING: Macaroni penguins usually begin breeding in late October, assembling in huge colonies and nesting on level to steep ground in mud or gravel. Two eggs are laid in early November and are incubated by both parents in long shifts, hatching in 33 to 37 days. After hatching, chicks are guarded by the male and fed by the female for up to 25 days and then gather in small crèches until they are ready to go to sea at about 60 to 70 days old. Penguins leave their breeding colony by April or May.

LIFE CYCLE: Macaroni penguins are thought to live between eight and 15 years in the wild.

FEEDING: This penguin feeds mainly on krill, but will also eat other crustaceans, small fish, and squid.

THREATS: Rising sea-surface temperatures as a result of global warming are expected to threaten the macaroni penguin's food supply by causing a decrease in prey abundance and driving prey further away from coastal areas and penguin breeding colonies. Macaroni penguins are also threatened by fisheries interactions and oil pollution.

POPULATION TREND: Despite population estimates of more than 11 million birds, macaroni penguins have experienced an estimated decline of at least 30 percent. Several authors have documented declines of 50 to 65 percent in many populations in the last 30 years.