GIVE TODAY
Rockhoppers are among the smallest of the penguins. 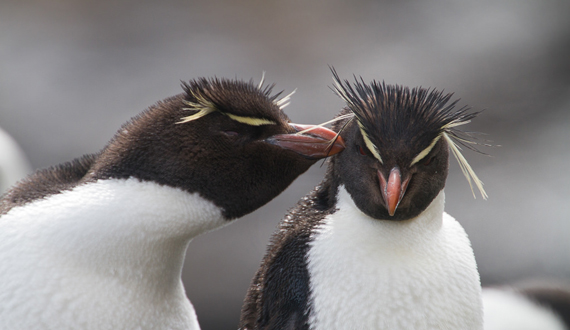 DESCRIPTION: At about 21.7 inches in length and 5.5 pounds, rockhoppers are the smallest of the yellow-crested, black and white penguins. They have red eyes, white underparts, slate-gray upperparts, and a straight, bright yellow eyebrow ending in long yellow plumes behind the eye. The top of the head has spiked black feathers.

MIGRATION: These penguins leave the breeding colony in late summer or fall and spend three to five months at sea, where they forage for food.

BREEDING: Rockhopper penguins usually breed in the early spring or late summer in vast colonies. They lay up to two eggs, with the first, smaller egg usually being lost. Eggs are incubated for four months by the male, who fasts or is nourished by the female.

LIFE CYCLE: The average rockhopper lifespan is about 10 years in the wild.

FEEDING: Rockhoppers primarily eat krill, but will also eat other crustaceans as well as squid.

THREATS: Researchers conclude that the declines observed in rockhopper penguin populations are a result of reduced prey abundance caused by global warming. In addition, rockhoppers suffer from the effects of overfishing and oil pollution.