Polar bear cubs are born with their eyes closed, weighing about the mass of a squirrel. 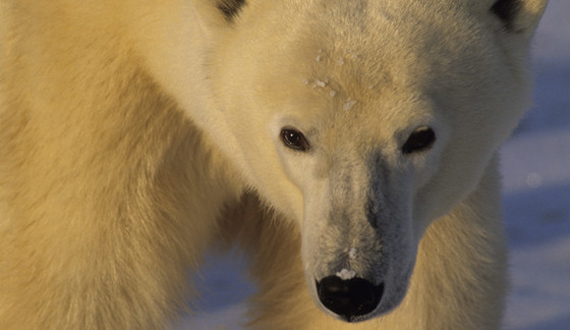 The great white polar bear is the youngest and largest of the world's bear species — a mighty hunter and fierce defender of its young that's among the world's most vulnerable animals. Two-thirds of the world's polar bears could be extinct by 2050 if greenhouse gas-fueled global warming keeps melting their Arctic sea-ice habitat.

The Center has led the charge to save polar bears from extinction. We wrote the 2005 scientific petition calling for the bear's protection under the Endangered Species Act, and we filed suit twice with our partners to force the administration to take action on that petition. In May 2008, our work paid off when the bear was finally listed as threatened under the Act. In 2010, our work spurred the U.S. Fish and Wildlife Service to protect 120 million acres of the species' habitat, the largest critical habitat designation in Endangered Species Act history. Big Oil and the state of Alaska brought a suit challenging the polar bear's critical habitat decision — forcing the Fish and Wildlife Service to rethink its landmark designation — but in February 2016 the bear won back its habitat protections in a momentous victory. The U.S. Supreme Court, in May 2017, refused to hear a challenge to the critical habitat designation, preserving the polar bear's 120 million protected acres.

Unfortunately drilling in the Alaskan Arctic still threatens polar bears and the entire Arctic ecosystem at risk. And the polar bear still doesn't have complete federal protection. When former Interior Secretary Dirk Kempthorne announced that the polar bear would be listed as threatened, he simultaneously vowed he wouldn't let the listing affect U.S. climate policy, executing an illegal final “4(d)” rule exempting greenhouse gas emissions — by far the leading threat to the bear — from regulation under the Endangered Species Act.

We immediately challenged the rule, made final in December 2008, and fought to change the polar bear's status from “threatened” to the more protective “endangered” — in which case the rule would have to be tossed. In December 2011, a year after Interior Secretary Ken Salazar refused to upgrade the bear's status, a judge struck down the Bush rule and ordered a new rule — putting the bear's fate directly in Obama's hands. But in 2013, the Obama administration reissued the polar bear extinction rule.

The Center's work has so far helped the polar bear keep its protected status, and we're still working to win the best polar bear protections possible to save this majestic bear from the deadly jaws of oil exploration and catastrophic climate change. And even after legal appeals to the bear's listing on several fronts, we've managed to help uphold the Endangered Species Act protections it so badly needs to survive.

Check out our press releases to learn more about the Center's actions to save polar bears.