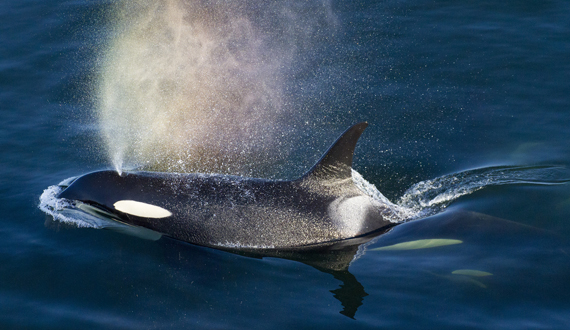 The charismatic killer whale, or orca, is the totem species of northwest Washington and coastal British Columbia. This intelligent, social predator is known to form lasting social bonds and lives in highly organized pods where everyone cares for the young, sick or injured. But like all endangered species, those pods must learn how to navigate the complicated, dangerous terrain of the 21st century.

The Center uses science and law to defend a critically endangered population on the West Coast known as the Southern Resident orcas (also called Puget Sound orcas and, as part of a larger group, West Coast orcas). These whales are distinct from all others — genetically unique, communicating in a unique dialect, and feeding extensively on salmon.

As few as 72 Southern Residents remain on Earth. They’re in a dangerous decline because of a lack of food, pollution, and noise and disturbance from boats.

Our science and legal team immediately set to work developing a citizen petition to protect Southern Resident orcas under the Endangered Species Act. After the G.W. Bush administration determined that the whale population was in danger of extinction but that this was “not significant,” the Center filed a lawsuit resulting in the orcas’ federal protection. Some critical habitat was set aside, and we began developing a recovery plan to ensure the whales’ survival. After still more years of Center work, including another petition and lawsuit, the National Marine Fisheries Service expanded their critical habitat to cover important foraging areas, river mouths and migratory pathways along the Pacific Coast from the Canadian border to Big Sur, California. Added to the current habitat protections in Washington’s inland waters, the total designation encompasses more than 18,000 square miles of marine habitat.

The Center has also filed federal lawsuits to create a “whale protection zone” in the heart of their Puget Sound habitat and challenging federal salmon stock assessments and fishing policies that fail to take into account the plight of Southern Resident orcas.