The Chatham petrel spends the majority of its life at sea. 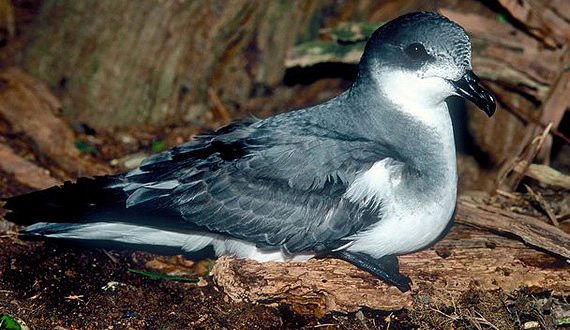 The Chatham petrel is an endangered seabird native to New Zealand's Chatham Islands. This attractive, gray-and-white bird is easily distinguished by the black mark behind its eye, its wings' uniquely patterned undersides, and the dark “M” emblazoned on the upper side of each of its wings. The petrel's long, stately wings mark it as a fast, capable flier.

Once present throughout the Chatham Islands before the arrival of humans, this species is now restricted to Rangatira Island. In addition to competition for breeding grounds, threats to the Chatham petrel include major habitat change, the introduction of foreign species and predators like rats and feral cats, and harm caused by commercial longline fishing operations. The bird's sparse burrow distribution and low productivity strongly point to a population in decline. In 1980 the International Council for Bird Preservation petitioned the U.S. Fish and Wildlife Service to list the Chatham petrel under the Endangered Species Act. Finally, after 29 years and extensive Center legal involvement, in late 2009 the Service listed this bird as endangered throughout its range.

MEDIA
Press releases
Search our newsroom for the Chatham petrel