Population Pressure and the Climate Crisis

A 2020 study found that if the climate crisis isn’t addressed, as many as 3 billion people will be living in areas considered too hot for human survival within 50 years, including places like Los Angeles and Paris. Those most affected will be the ones who haven’t been responsible for the greenhouse gas emissions but bear the disproportionate burden of an unjust, polluting system. Extreme heat and other effects of rising greenhouse gas emissions are more harmful to women, gender-diverse people, and Black, Indigenous and people of color. Climate change is worsening a wide range of health outcomes like heat-related illness, vector-borne diseases, asthma, allergies, malnutrition and mental health.

The Intergovernmental Panel on Climate Change says that most of the warming of the past 50 years is attributable to human activities, particularly greenhouse gas emissions from high-income countries, and has identified population growth as an immediate driver of emissions. Because population pressure increases emissions through the burning of fossil fuels, increased material extraction, deforestation, industrial agriculture, and other manufacturing processes, it’s important to advocate for policies that rapidly reduce those emissions and build resiliency in a changing climate, including the advancement of gender equity and access to reproductive healthcare. While individuals are part of the climate change solution, corporations and governments must take the lead and act now to rapidly reduce their emissions and make sustainable lifestyles more accessible.

Learn more about how the climate crisis threatens life on Earth.

In 2021 more than 7 million acres in the United States burned from wildfires. While wildfires are a natural and necessary process for many ecosystems, the amount of area burned and community destruction from wildfire have been increasing due to megadroughts, record-breaking heat waves, volatile lightning storms, people building homes and businesses closer to fire-prone areas, and invasive plants that burn more quickly than native plants. As these fires spread, people and wildlife can suffer from smoke inhalation, oxygen deprivation, dehydration, heat exhaustion or serious injury. Wildfire smoke harms pregnant people and fetuses and worsens cases of asthma in children. Wildfire-related pollution causes more than 33,000 deaths globally.

Sea levels worldwide are rising at increasing rates as temperatures warm due to climate change. If we don’t reduce our greenhouse gas pollution, those levels will rise another 3 or 4 feet on average — and perhaps up to 6.5 feet or more — within this century. The harm to people will be disastrous: According to a 2018 Census Bureau report, 29% of the U.S. population lives along the coast. Also, 233 threatened and endangered species in 23 coastal states are at risk from sea-level rise. This means that, left unchecked, rising seas threaten the survival of 17% — 1 in 6 — of our country’s federally protected species. Rising seas and increasingly dangerous storm surges threaten to submerge and erode their habitat and make the groundwater more saline, killing coastal plant communities and ruining drinking water.

It’s estimated that more than 200 million people worldwide will be displaced by the climate emergency by 2050.  Climate refugees can already be found in the United States. In the face of rising sea levels, subsiding land and frequent flood events, the south Louisiana residents of Isle de Jean Charles need to move to higher, safer ground. With the loss of more than 98% of the community’s land over the past 60 years, resettlement is inevitable. Also, Native Alaska Indigenous communities are being displaced by coastal erosion due to thawing permafrost and increasing exposure to storm surges due to sea ice loss.

Solutions
Not only must we reduce greenhouse gas emissions to slow the amount and speed of the impending climate crisis, but we must also take action to reduce our vulnerability to the harms caused by the current and future impacts of climate change. Gender equity and empowerment initiatives are two important climate mitigation and adaptation strategies noted by Project Drawdown, a nonprofit leader working to reduce emissions. 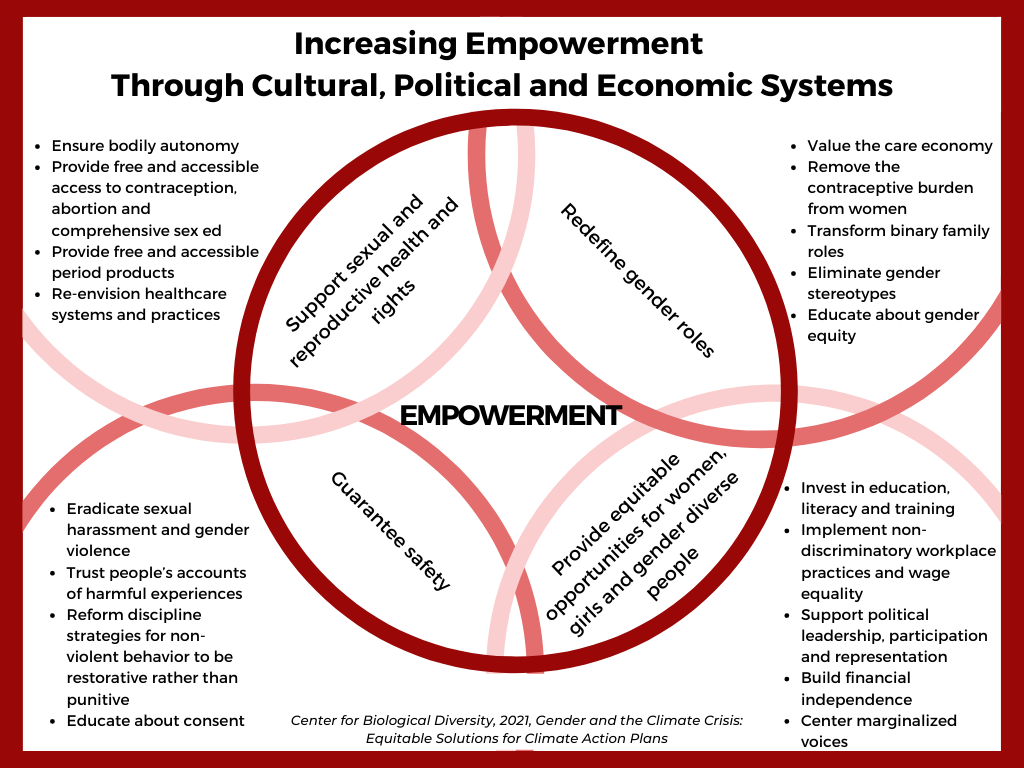 Several studies have shown that family planning and gender empowerment strategies, if implemented globally, would reduce annual GHG emissions. A 2017 study showed that voluntarily lowering fertility rates through strategies such as improved healthcare, education, and economic opportunity for women and girls would result in a 35% reduction in emissions by 2100. Project Drawdown notes that improving the health and education of women and girls globally would better equip them for the climate crisis with the side effect of saving 85 gigatons of carbon dioxide equivalent due to slowing population growth.

Gender empowerment and education initiatives are often seen as solutions that are only applicable to low-wealth countries, but improving gender equity in the United States — one of the world’s highest consuming countries — could have a substantial environmental impact. Yet people in the United States face barriers to choosing if and when they want to have children. Policymakers can remove these barriers by supporting universal access to voluntary modern family planning methods (including oral contraceptives, long-acting reversible contraception, condoms and emergency contraception); LGBTQIA+ inclusive, culturally responsive and medically accurate comprehensive sexual education; and affordable sexual and reproductive healthcare, including abortion, that allows individuals to have agency and autonomy over their bodies. Additional solutions include supporting educational opportunities, redefining gender roles, creating equitable opportunities for women and LGBTQIA+ people, and guaranteeing safety from harassment and violence.

Although the connection between population growth and the climate crisis can be controversial, we need to talk about it. The public agrees: Through a large national survey conducted by the Center in 2020, we learned that more than 60% of people believe the climate crisis is a very or critically important issue, just behind healthcare. Climate change is being cited by young people as a reason to have fewer children. According to a 2018 New York Times poll, men and women aged 20-45 are having fewer children than their ideal number because 33% are worried about climate change and 27% are worried about population growth. In the Center’s survey, 33% of respondents somewhat or strongly agreed that, “Climate change compels Americans to choose to have fewer children.” By breaking the taboo of talking about sex, family planning, abortion, and other reproductive health topics, we can better advocate for reproductive rights and justice while supporting people who are already bringing concerns about our climate future into their family planning decisions.

There is a clear need for gender empowerment solutions that are lacking in governmental, corporate and organizational policies. In a 2021 “World Scientists’ Warning” study, a review of 212 climate mitigation policy commentaries found that population and social justice appeared less frequently than other solutions like energy, food and the economy. A 2022 Center study showed that gender equity solutions are missing from municipal climate plans, despite the fact that women and gender-diverse people are disproportionately affected by climate change.

The pressure of population growth makes it harder to meet emissions-reduction targets while magnifying climate change’s detrimental consequences on humans and other species. While addressing population growth is a long-term mitigation strategy, there are also short-term adaptation benefits, including improved health care, empowerment and other positive social outcomes.

Case study
The great white polar bear is the youngest and largest of the world’s bear species. As top Arctic predators, polar bears often eat only seals’ skin and blubber, leaving the carcass for other animals to scavenge, and thus play a critical role in the Arctic food chain. But they need sea ice to hunt, and if unchecked global warming continues melting their habitat, two-thirds of the world’s polar bears could be extinct by 2050. As hunting becomes harder and polar bears move closer to people for survival, deadly interactions with humans become more frequent. To save their remaining habitat we must rapidly transition from fossil fuels to clean renewable energy, transform agriculture and manufacturing, and implement long-term strategies such as gender equity and living lower carbon lifestyles.

How to Bring Anti-Racism into the Population Conversation

The 17 Principles of Environmental Justice