Protecting endangered animals and plants is the Center's core mission. From miniscule, nearly invisible fairy shrimp to gray whales and towering redwoods, we believe all species have an intrinsic right to live.

ABOUT OUR ENDANGERED SPECIES WORK

What took 4 billion years to evolve is vanishing in the blink of an eye.

Under relentless pressure from habitat destruction, invasive species and climate change, species are going extinct at up to 1,000 times the natural rate. The diversity of life that sustains ecological systems and human cultures around the world is collapsing. In response, the Center's programs to save unique species and lands now reach beyond U.S. borders, from the Antarctic to the North Pole and Asia to North Africa. In the United States, our goal is to secure legal protection for all species in danger of extinction. The Center is the nation's leader in conserving endangered species, having secured Endangered Species Act protection for more than 700 species and over half a billion acres of critical habitat.

• Compiling and analyzing data about species status and recovery.
• Submitting legal petitions, filing lawsuits when necessary, using the leverage of our supporters' voices and taking multiple other actions to ensure that imperiled species are federally protected.
• Obtaining adequate amounts of critical habitat for species.
• Advocating for sound conservation policy.
• Watchdogging Congress and government agencies.
• Expanding our use of creative media to keep you informed and engaged.

Our Endangered Species program has:

• Submitted the largest petition ever filed targeting imperiled U.S. amphibians and reptiles, seeking Endangered Species Act protection for 53 of the rarest and most sensitive species on the planet.

• Secured safeguards for seven species of turtles under the Endangered Species Act, including the alligator snapping turtle and the Pearl River map turtle.

• Restored protections that had been stripped away under Trump to more than 1,000 migratory birds.

• Restored protection to over 3 million acres of critical habitat for northern spotted owls.

• Gained first-time protection, through listing petitions and litigation, for some 720 species under the Endangered Species Act — more than all other U.S. conservation groups combined.

• Published groundbreaking scientific articles and comprehensive reports on subjects such as species recovery and the unparalleled success of the Endangered Species Act.

Insects play major roles in keeping ecosystems and humans healthy and functioning. Despite their importance, insects are declining in an extinction crisis across the globe. Learn more about our Saving the Insects campaign.

The Center is working to protect amphibians and reptiles on the knife-edge of extinction — species facing a profound extinction crisis unlike any other.

Gray wolves are under attack. Learn about these critical predators' peril and what the Center's doing to save them across the lower 48 states.

We're now experiencing the worst spate of species die-offs since the loss of the dinosaurs. Get the scary inside scoop on the extinction crisis.

What exactly is biodiversity, anyway? Learn the whats, whys, and what-ifs regarding the best thing on Earth: life in all its forms and glory. 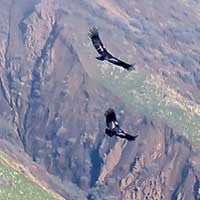 Our research shows that plants and animals with federally protected habitat are more than twice as likely to be moving toward recovery as species without it. Learn what makes critical habitat so critical.

On Time, On Target: How the Endangered Species Act Is Saving America's Wildlife

Assessing Protection for Imperiled Species of Nevada, U.S.A.: Are Species Slipping Through the Cracks of Existing
Protections?