OK, so you've decided you want to be a kid conservationist. We're going to show you just how easy, awesome and fun it can be. But it does involve a little background knowledge — after all, how can you be a conservation hero without a toolkit of special knowledge and skills? We'll help you put that kit together.

First things first: You may have a few questions. Ask and ye shall receive.

+ What are we saving our environment from?

Most often conservationists are trying to protect our natural world from the effects that we ourselves — humans — are having on that world. That is, conservation often means humans saving nature from humans. Weird, right?

People don't usually hurt the Earth on purpose, of course — at least not just for the sake of hurting it. Some people in big business do know they're harming our environment when their companies abuse our natural resources in the quest for money. But most people don't mean any harm — it's just that we can't really help but change our environment, to some degree, just by living on this planet. And over the past couple of hundred years, since the beginning of the widespread use of fossil fuels, those changes have accelerated in a way that's dangerous not only to nature, but to our own societies.

All of us live in buildings that were at some time constructed on top of wildlands, where animals and plants once lived and grew without humans bothering them. All of us have possessions made from resources taken from our environment, like the wood taken from trees in a forest to make a pencil. And when we light up our houses at night, most of us use electricity that comes from a power plant burning a fossil fuel — like coal. When we ride in cars, buses or planes, we also burn fossil fuels — oil and gasoline. Burning these fuels pollutes the air and creates climate change. Learn more about climate change.

We call things like development, logging and pollution threats to an endangered species when they hurt that species. And they are hurting species — so much so that animals and plants are going extinct, as the dinosaurs once did, at a breakneck pace. Those processes are also ruining the beautiful places we like to play, fish and camp.

See? Just by living in our modern world, we all do things to change the planet. But it's the degree to which we change it — and the actions we take to balance out that change — that matter.

+ Why should I care about the environment?

There are so many reasons to care about the animals and plants that share our planet that we can't possibly list them all. But here are some biggies:

You may not be able to describe exactly what makes you value all these individual kinds of animals and plants, and that's part of the astonishing bond we have with them. It's not always easy to explain, because it runs so deep. We value other creatures just as we value other individual people, though our relationships with them are different. People and other animals all have identities and places in the world unlike anyone or anything else. That makes them unique and precious.

The same goes for ecosystems: Each desert, forest, wetland, plain and coral reef is different from others because it's made up of different species and it's in a different place. And each is valuable, among other reasons, because people enjoy its existence — whether it's just knowing it's out there (do you dream of going to the Sahara desert one day? The Brazilian rainforest? The windswept peaks of Alaska?) or whether you already use it to hike, camp or play in.

Each species plays a vital role in its ecosystem — making up biodiversity.

One way to see the importance of each individual species, even the smallest insect, is by looking at the critical role it plays in its ecosystem. Each species fits into its habitat and the local food web like a puzzle piece. Without all the native species that naturally make up an ecosystem, that ecosystem would be missing a piece of itself, and natural processes may become out of balance. For example, if wolves were to go extinct, the animals they eat — like deer — would become too great in number, eating too many of the plants that other animals in the ecosystem depend on, and possibly making them die out too.

The huge number of widely different animal and plant species in an ecosystem — or on our whole planet — is called biodiversity, which is a beautiful and valuable thing in itself. Learn more about biodiversity.

Biodiversity — (and many individual species) are extremely important to human existence — and so is stopping climate change. Animals, plants, ecosystems and a healthy climate are necessary for humans to live well. For example, bug-eating bats aren't only awesome and unique — they also eat a lot of insects that might otherwise ruin human food crops. At the same time, many kinds of insects are key for pollination (the way most plants reproduce) — so if these insects went extinct, we wouldn't have flowers or forests. Some species are important because we use them for medicine, like certain types of plants.

And although most of our food is grown and raised by humans now, some ecosystems must survive if we want to keep getting food from them — like the ocean. Can you imagine a grocery store that doesn't sell canned tuna? Or a Japanese restaurant without sushi? It could happen if overfishing gets much worse.

And of course we must stop global warming and sea-level rise from making our weather go haywire and (among many scary effects of climate change) flooding our coastal cities. As coral reefs are dying off and polar bears are losing the ice they need to survive, weather patterns are also changing for humans, causing "superstorms" like Hurricane Sandy, and at the same time causing droughts — besides simply making hot places even hotter. And if anyone tells you climate change is a natural process, not caused by humans — well, they're just not informed. Get details on why climate change is real.

As a young person, you are someone who will inherit the Earth — and this is your chance to become a leader in the movement to make sure that future Earth is still beautiful and full of amazing wildlife. Do you want to grow up, get a house and maybe start your own family in a world without elephants, great apes, polar bears or bats? What about a world in which old or weak people far more commonly die of heat stroke in the summer, and coastal cities like Miami and Los Angeles have been flooded by sea-level rise?

That world would be not only boring and drab, without all the wondrous biodiversity we have now — it would also be dangerous and difficult.

As a young person who'll soon vote on laws that help protect the Earth and its species — and hey, hasn't anyone told you that you could be president someday? — it's your mission to learn about all the issues discussed on this page now.

+ Why should I be excited about it?

The answer is: Nature is exciting. And so is being a part of the battle to defend it — which you're doing right now, just by learning.

If you're not convinced yet, please — check out more of this website.

Look at our slideshows, watch our movies, try our green-living tips, learn about other kids who've decided to be environmental activists, and read all kinds of wild and wacky facts about wild and wacky animals and plants.

Oh, and go outside. If you live near a park, a patch of woods or another wild place, go there and pay attention to all the living things. If you live in a big city, observe the urban wildlife, like pigeons and ants, and see if you can get your family on a day hike or camping trip.

Whatever you do, if it has to do with animals and the rest of nature, keep your mind wide open and we're pretty sure you won't be bored. 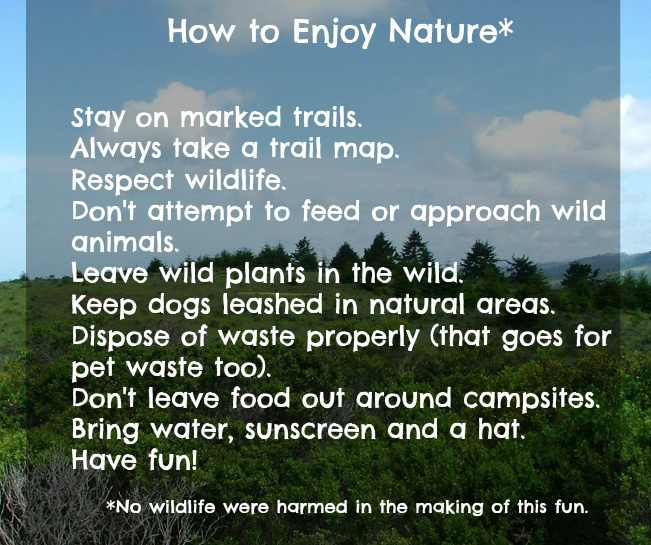