Pangolins' long, sticky tongues can be the length of their entire bodies. 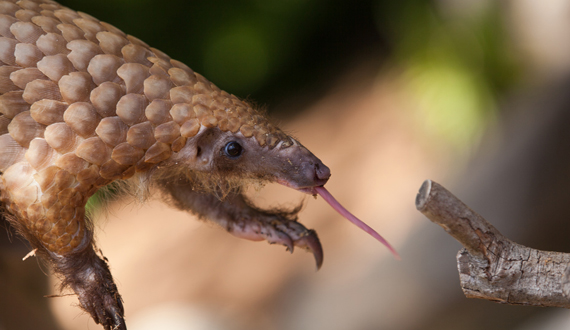 Pangolins may be the most endangered species you've never heard of. Luckily their plight is becoming more well known. These charmingly odd, termite-eating mammals are covered from head to tail with large, overlapping scales. But one of their most interesting attributes — their ability to roll up into near-perfect balls when threatened — makes them easy pickings for poachers.

Unfortunately pangolins' scales are in high — and increasing — demand in Asian medicine, and their meat is considered a delicacy in China. An estimated 1 million pangolins were removed from the wild over the past decade to meet this growing demand, making them the world's most illegally trafficked mammals.

Some Asian pangolin species have astonishingly already declined by more than 50 percent in recent years, and poachers are now turning to Africa's pangolins to meet the burgeoning demand. Pangolins may be poached to extinction in the coming decades if we don't crack down on the trade.

The Center and our partners are working hard to combat rampant pangolin poaching and save one of nature's most amazing and unusual creatures.

In 2015 we petitioned to protect them under the U.S. Endangered Species Act. In response the U.S. Fish and Wildlife Service conceded that protections might be warranted, inviting information from scientists and the public about pangolins' status and threats to determine whether an endangered listing would be appropriate.

But five years later the agency still hadn't moved forward on protections — though all the while pangolins were moving closer to extinction. So in 2020 the Center and allies sued the Service to compel it to propose U.S. safeguards.

We're also working to strengthen trade prohibitions on the international level. In August 2020 we filed a legal petition urging the U.S. secretary of the Interior to formally certify China for illegally trading in critically imperiled pangolins.

As we fight for pangolins on both those legal fronts, we're raising awareness to help save these largely unknown but gravely imperiled animals.

Check our our press releases to learn more about the Center's actions for pangolins.