The word "ocelot" comes from the Mexican Aztec tlalocelot, which means "field tiger." 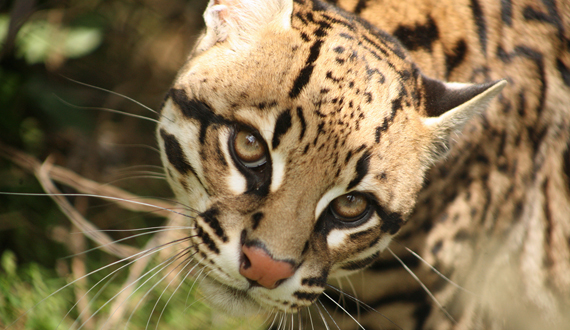 While the ocelot is widely distributed from Mexico through Central and South America, the U.S.-Mexico border wall restricts its movement across political boundaries. The ocelot is also being hurt by a loss of habitat in southern Texas, caused by an expanding transportation infrastructure and urban development following the enactment of the North American Free Trade Agreement. Associated land-development projects — including the annexation of 17 miles of land between Laredo and the Columbia-Solidarity Bridge — also contribute to the ocelot's peril.

Once hunted as “unwanted” predators and for their beautiful fur, today more ocelots are killed crossing roads than by any other human-made cause. Still, the U.S. Fish and Wildlife Service has never granted the species much-needed critical habitat — and the federal government is still setting traps, snares and poisons that risk injuring and killing ocelots in the Southwest.

MEDIA
Press releases
Search our newsroom for the ocelot