As the world reels from the coronavirus pandemic, this tragedy is spotlighting how wildlife trade and habitat destruction threaten human health. It shows how urgently we need to change our relationship with nature.

Many of recent history’s deadliest diseases spread to humans from wildlife. All zoonotic diseases already exist in animals. Those diseases can evolve to infect humans. Every time we enter pristine wildlife habitat and come into direct contact with wild animals for pets, food, medicine or other products, we risk contracting zoonotic diseases. 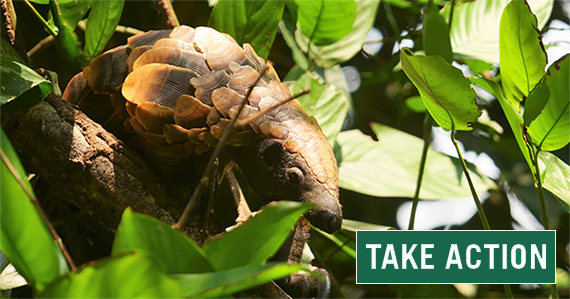 Coronavirus and the Wildlife Trade

COVID-19 — the disease caused by the SARS-CoV-2 virus — is a zoonotic disease. That means it came from an animal or animals. SARS-CoV-2 is not the first novel coronavirus to infect humans — it’s the seventh.

Scientists continue to study the virus’ origins. But many researchers believe it originated from a bat, a scaly mammal called a pangolin (globally the most heavily trafficked mammal), or potentially both. The virus may have spilled over to humans from an unknown animal. Or it may have evolved after infecting people.

Experts have raised concerns about wildlife markets in China and other countries where many different kinds of live animals are kept in cramped cages for purchase and slaughter.

This kind of proximity between people and wildlife (and sometimes captive-bred animals) carries huge disease risks. Infectious diseases cause about a quarter of human deaths. Of these deaths, almost 60% are zoonotic in origin. Of the zoonoses, more than 70% are from wildlife.

The wildlife trade isn’t the only problem. As humans increasingly enter and destroy pristine places where animals live, we increase disease risk.

As our climate changes, wildlife moving to new habitat will occur in unique combinations, risking further spillover events. And as the human population grows, increasing encounters between people and wildlife will escalate the danger.

In the past 40 years, the worst human pandemics and epidemics — HIV, SARS, avian flu, swine flu, Ebola virus and Zika virus — all stemmed from trading in and consuming animals and destroying their habitat.

Habitat destruction and trade in and consumption of wildlife happen around the globe.

But the United States plays a major role. We’re one of the world’s top importers of wildlife, consuming an estimated 20% of the global wildlife market.

Our demand has spurred disease outbreaks. For example, the U.S. 2003 monkeypox outbreak occurred because our nation imported small mammals that spread the disease to pets, which then infected their owners.

Preventing the next zoonotic pandemic requires action — in the United States and around the world — to halt the consumptive wildlife trade and habitat loss and infringement.

We’ll lose a million species in the coming decades unless we change business as usual, more than 150 experts brought together by the United Nations has warned.

While our global conversion of land and exploitation of wildlife risk future pandemics, they’re also the greatest drivers of the extinction crisis. We need bold policy shifts to protect people, wildlife and nature.

The coronavirus has inflicted unimaginable suffering. Unless we make changes, we’ll face a future full of pandemics springing from wildlife.

We’ve seen U.S. leaders point fingers at other countries and regions without taking responsibility for how our economy drives the wildlife trade.

It’s time to end our own insatiable demand for the world’s wildlife. That means ending the commercial wildlife trade, halting illegal wildlife trade and providing alternative livelihoods for those who depend on wildlife and resource extraction.

We must also protect wildlife habitat by supporting the global call to protect 30% of terrestrial, freshwater and marine ecosystems by 2030 and 50% by 2050. That’s why the Center for Biological Diversity released a comprehensive plan, Saving Life on Earth, for tackling the extinction crisis.

Now is the time to for bold change. Our futures depend on it.

Join our fight against extinction.