For California to be at the forefront of the fight against climate change, the state must confront the huge climate pollution source that’s zipping along roadways all around us: passenger cars and trucks.

Despite some important steps to clean up the automobile, the daily lives of many Californians still revolve around gas-powered cars, SUVs and pickup trucks — which together emit 30% of the state’s global warming pollution.

Join us in calling on Gov. Newsom to require 100% zero-emission vehicle sales by 2030.

To help avoid the fires, droughts, disease and other dangers that are increasingly scarring the globe as warming intensifies, California must rapidly shift its vehicle fleet to electric vehicles, which emit no tailpipe climate pollution, and clean up the remaining petroleum vehicles faster.

Join us in calling on Gov. Newsom to require 100% zero-emission vehicle sales by 2030 — and a minimum 7% annual decrease in greenhouse gas emissions from conventional vehicles in the meantime — while ensuring that low-income communities and those of color benefit equitably from the transition.

California must lead the way on clean vehicles and seize this opportunity to create good, family-supporting jobs as part of a just, green economic recovery.

For the past 50 years, automakers have actively undermined climate science, fought stronger standards by repeatedly crying wolf, and broken promises not to sue in exchange for weaker regulations. This history illustrates why California must quickly adopt strong emissions standards and ZEV requirements rather than depend on unreliable promises and unenforceable side deals with these companies.

1950s–1960s – To the frustration of Los Angeles policymakers, automakers attempt to stave off state and federal pollution rules while refusing to voluntarily reduce pollution from their vehicles.1

Your support helps our work protecting species and the climate. 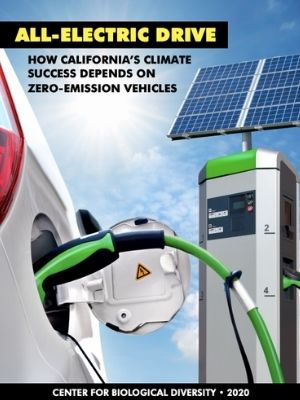 + SPECIES
By taxon
By region

Photo of 100% electric vehicle by BrentDanley/Flickr