The gopher tortoise belongs to a group of land tortoises that originated in North America 60 million years ago, making it one of the world's oldest living species. 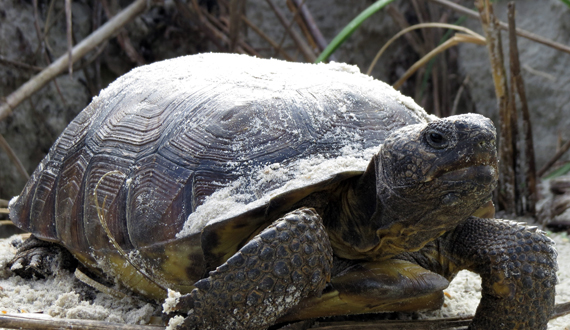 As this keystone species' name suggests, the gopher tortoise is an expert at living underground — like a gopher. Gopher tortoises have shovel-like front legs and strong, thick back legs to help them dig intricate burrows, which they can enter and exit easily thanks to their low-profile shells. When these tortoises aren't industriously digging burrows to hide from extreme weather and predators, or seeking out an ideal mate, they spend their days chomping on leafy greens under open canopies of pine trees. These slow-and-steady reptiles are team players, sharing their burrows with more than 360 other species of the U.S. Southeast, which take over the burrows after the tortoises move out.

Sadly gopher tortoises are struggling to survive as their habitat is destroyed for urban development. They need large, unfragmented parcels of undeveloped land, so any disruptions or barriers in their natural habitat limit their food availability and options for burrow sites — not to mention exposing them to closer contact with humans and their vehicles, with road mortality being a major cause of death for adult gopher tortoises.

Fittingly, gopher tortoises in Louisiana, Mississippi and Alabama (west of the Mobile and Tombigbee rivers) are protected as “threatened” under the Endangered Species Act — but those in eastern Alabama, Florida, Georgia and South Carolina lack federal protections.

While tortoises across their range continue to lose their homes and lives in the wake of human development, the U.S. Fish and Wildlife Service has relegated the eastern population of gopher tortoises to its “candidate list” — a waiting list for imperiled species in need of protection but offering no real safeguards. The majority of the remaining eastern gopher tortoises live in Florida.

Check out our press releases to learn more about the Center's actions for gopher tortoises.