The U.S. population of Sonoyta mud turtles has been reduced to a single reservoir within the Organ Pipe Cactus National Monument named Quitobaquito Springs. 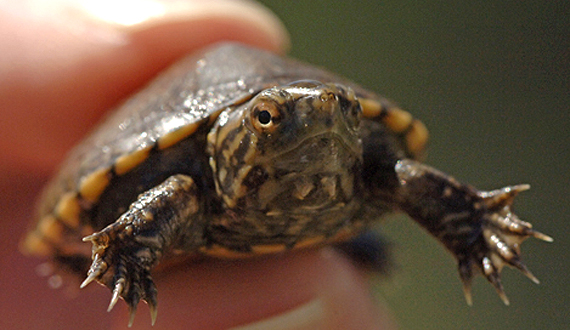 The Sonoyta mud turtle has evolved as an aquatic species in one of the driest parts of the Sonoran Desert. With webbed feet and an innate ability to swim, this turtle depends heavily on what little water remains in the Southwest. The easiest way to identify a Sonoyta mud turtle is by its location, since it's the only turtle inhabiting its very small range.

The U.S. population of this unique reptile has been reduced to a single reservoir within the Organ Pipe Cactus National Monument, named Quitobaquito Springs. In Mexico, these turtles inhabit a couple of small, still-flowing sections of the Rio Sonoyta.

Quitobaquito Springs and the Rio Sonoyta, like many aquatic habitats in the Southwest, are threatened ecosystems. The major threat: groundwater withdrawal. Lower water tables could ultimately drain the water on the surface altogether, meaning Sonoyta mud turtles would face a load of trouble.

In 2005 the Center filed a citizen petition to list the Sonoyta mud turtle as endangered under the Endangered Species Act. We swooped in to take this action after the species had languished for eight years as a candidate for listing — a designation that offers no federal protections — but it wasn't until this turtle had been a candidate for 20 years that the U.S. Fish and Wildlife Service protected it under the Endangered Species Act, in 2017.

Finally, in 2020, the turtle earned federally protected critical habitat: 12.3 acres in the Rio Sonoyta watershed of Organ Pipe Cactus National Monument in Pima County, an area was occupied by the only known population of Sonoyta mud turtles left in the United States — an estimated 150 turtles living in a small, spring-fed pond just over 100 yards away from the U.S.-Mexico border. This critical habitat designation is a welcome step; unfortunately the lawless construction of the border wall could render the new protections meaningless.The Center continues to defend this amazing animal from all its threats.