Scientists believe mother skinks stay with their nests, licking and turning their eggs until they hatch. 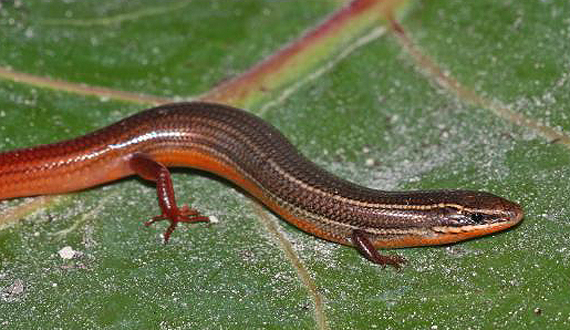 The Florida Keys mole skink is one of the rarest and most mysterious of Florida natives. This small, five-inch-long lizard has shiny, armor-like scales, a pinkish-red tail and a brown body. It's a secretive animal, living under rocks, leaves, debris and washed-up beach vegetation called tidal wrack. It's also the southernmost U.S. mole skink, found mainly in Dry Tortugas and the Lower Keys along Florida's shoreline, living in sandy areas where it burrows deep for refuge.

But this little lizard is in trouble much deeper than its burrows. Its populations are currently in sharp decline because of urban development in the past and sea-level rise now and in the future, which causes flooding that destroys its habitat. Human population has spurred development along the shoreline in the Florida Keys, destroying many of the nooks and crannies this mole skink calls home.

The Center is working to halt destructive sea-level rise and prevent the extinction of Florida Keys mole skinks. In 2010 we filed a petition to protect 404 southeastern aquatic species, including the skink, under the Endangered Species Act. In its 2011 response to that petition, the U.S. Fish and Wildlife Service found that the mole skink may warrant the Act's protection — but the agency failed to make a final decision. So after submitting a notice of intent to sue, in 2013 we filed a lawsuit seeking protections for this mole skink and its habitat — and a few months later, the Service agreed to make a protection decision by 2017.

In October of that year, however — under the Trump administration — the Fish and Wildlife Service denied Endangered Species Act protection to the Florida Keys mole skink, along with 24 other highly imperiled species.  In September 2019 we filed a lawsuit challenging this unlawful denial, and a year later we prevailed in court. The judge ordered the Service to make a new protection decision for the skink using the best available science, and the Service agreed to complete this work by September 15, 2022.

• Scientists believe mother skinks stay with their nests, licking and turning their eggs until they hatch.

• These skinks use their sleek bodies and little legs to "swim" through sand.

• Males display patches of pink and orange during the breeding season, although hints of these patches can be apparent throughout the year. Both males and females have beautiful red tails — arguably the most festive tails of all the skinks.