The Huachuca water umbel is an herbaceous, semi-aquatic, perennial plant with slender, erect leaves that grow from creeping rhizomes. 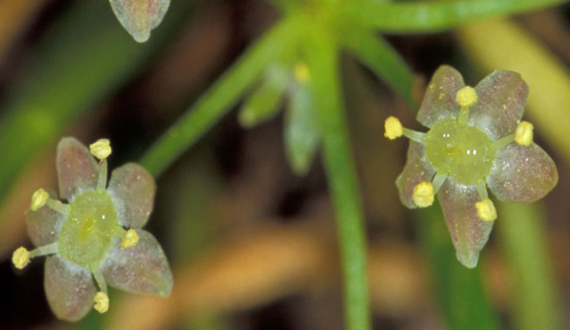 Once a flourishing part of extensive riparian habitats in southeastern Arizona and northern Sonora, Mexico, the Huachuca water umbel has been reduced to a handful of discontinuous clumps in a handful of Southwest wetlands. To ensure the plant didn't dry up altogether, the Center petitioned the U.S. Fish and Wildlife Service to list the species under the Endangered Species Act in 1996. It was listed the following year. We've also challenged grazing allotments that threaten numerous obligate wetland species, including the Huachuca water umbel.

The Huachuca water umbel has a unique ability to expand its population quickly after a flood, moving to disturbed habitat until competition with other species becomes too great. But to use this method, the plant needs refugia — places that let it escape the effects of floods — as well as an unaltered watershed flow system and a healthy riparian community. With suitable wetland habitat rapidly disappearing from the Southwest, this opportunistic herb is having trouble finding opportunities.

The San Pedro River, one of the water umbel's main habitats, is drying up due to unplanned growth and lack of water-conservation planning. Largely to blame is Fort Huachuca, an Arizona military compound that shares its name with the Huachuca water umbel — but apparently doesn't want to share the area's water. To protect the San Pedro and its endangered inhabitants, the Center filed a lawsuit in 2001 and forced Fort Huachuca to improve its feeble water conservation plan the next year. We continue to help the water umbel through our San Pedro River Campaign, which seeks to reform water use in the river basin and ensure that water remains in the river's tributaries.

We continue to defend this unique plant and its habitat from development, the destructive border wall, and a long list of other threats.