While grooming, otters force air bubbles down next to their skin. These bubbles act as insulation and provide buoyancy. 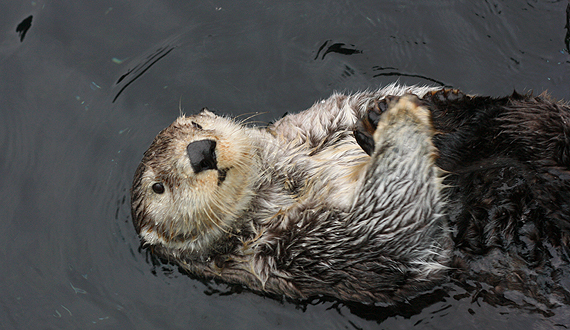 Unlike most marine mammals, sea otters are primarily insulated by fur, not blubber. In fact they have the densest fur in the animal kingdom.

Sadly that thick, resplendent coat has also given otters some of the world's most valuable pelts.

In North America sea otters once ranged from Baja California, Mexico, all the way to Alaska. Between 1741 and 1911, the maritime fur trade fueled voracious large-scale hunting and trapping that devastated the species. Their numbers plummeted.

In the 20th century, California sea otters — also called southern sea otters — had almost disappeared and were believed extinct until a small group (or “raft”) of them appeared off the coast of Big Sur.

Over the past few decades, conservation efforts — including an international hunting ban, reintroduction programs, and U.S. Endangered Species Act protection — have helped sea otters rebound. But local populations are still fluctuating, with many declining.

Today the species occupies just a tiny fraction of its historic range and is still threatened by climate change, disease, pollution, fisheries and other threats — including oil spills like the one at Huntington Beach in 2021, a shocking reminder of the ongoing threat from the oil industry’s aging infrastructure off California’s coast.

Sea otters still need federal protection, and they deserve an ambitious effort to bring them back along the California coast and other areas where they once flourished. We petitioned to reintroduce sea otters to a large stretch of the West Coast.

Southern sea otters earned “threatened” status under the Endangered Species Act in 1977 — but that far from guarantees the Act’s enforcement. That’s where the Center came in.

Our first win for these otters was in 2000 when, in response to pending litigation by the Center and allies, the California Department of Fish and Game shut down a set-gillnet fishery and effectively banned gillnet fishing in the Monterey Bay National Marine Sanctuary.

More than a decade later, we helped uphold the U.S. Fish and Wildlife Service’s decision to end a program relocating sea otters from a large portion of Southern California waters, including a “no-otter zone” provision removing them from their natural habitat and letting the fishing industry dodge Endangered Species Act rules protecting them.

Northern sea otters didn’t get federal safeguards along with their California cousins. So in 2000, the Center petitioned the Service to protect otters in southwest Alaska as a “distinct population segment” under the Endangered Species Act. We kept legal pressure on the agency until 2005, when this dwindling population finally earned protection. Our follow-up lawsuit the next year resulted in a settlement forcing the designation of critical habitat, finalized in 2009 at 5,855 square miles of ocean.

Check out our press releases to learn more about the Center's actions to save sea otters.