With longer tails and larger wing surfaces than other bats, northern long-eared bats have increased maneuverability during slow flight. 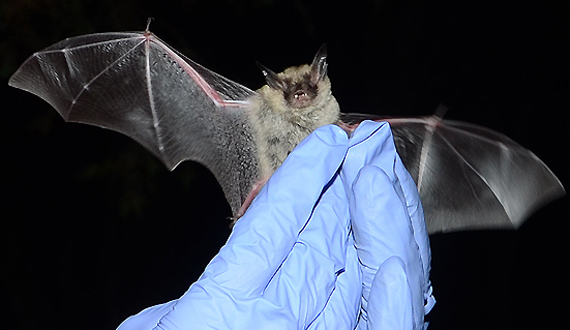 The northern long-eared bat — distinguishable from its close relatives, as one might presume, by its long ears — is a small bat associated with mature, interior forest environments. Unlike most other bats, the northern long-eared forages along wooded hillsides and ridgelines — not above valley-bottom streams and along the edges of riparian forests. This species is also much more solitary in its roosting and hibernating habits than are other bats, preferring to hide in tight crevices and holes instead of hanging out in open areas within caves. Sometimes only the nose and ears of northern long-eared bats are visible when they hibernate.

Because of this species' strong association with large blocks of older forests, forest fragmentation, logging and forest conversion (such as clearing trees for agriculture and development) are also major threats to the species — not to mention direct human disturbance; industrial wind-energy projects which kill bats that fly into them; environmental contaminants like pesticides and fracking wastewater; and other forms of habitat destruction, such as mining.

Because of these ongoing threats and this bat's dramatic decline due to white-nose syndrome, the Center petitioned for the northern long-eared bat to be added to the federal list of endangered species in 2010. In 2015 the Service finally placed the bat on the list, but the agency backpedaled from its initial recommendation to protect it as “endangered,” instead granting it the less protective  “threatened” status. In addition, the Service issued a special rule exempting nearly all activities harmful to the bat (short of intentional killing) from the normal provisions of the Endangered Act — including some of the bat's greatest threats: logging, oil and gas drilling, mining, and construction of wind energy projects. The Service has also declined to protect any of critical habitat for northern long-eared bats.

To win these bats the full protection they need, the Center and allies sued. In 2020 a federal court rejected the Fish and Wildlife Service's decision to deny full protections to northern long-eared bats, ordering the agency to take another look at safeguarding the species. And in 2022, the Service protected the bats as endangered.

With your help, we'll keep fighting for the survival of these unique flying mammals.

Check out our press releases to learn more about the Center's actions for northern long-eared bats.