Male moose's antlers can spread 6 feet from end to end. 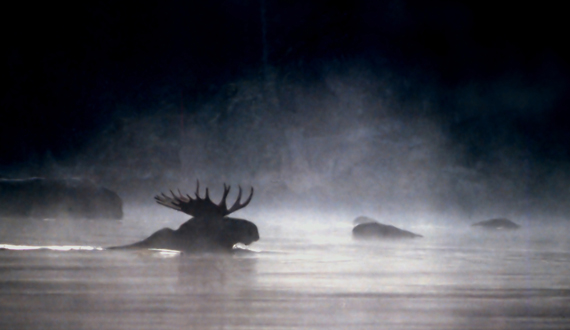 The midwestern moose (Alces alces andersoni), sometimes called the Andersoni moose, is one of four North American moose subspecies. Distinguished by its massive antlers, long snout, short tail and powerful body, the moose is the largest member of the deer family. Symbolic of the Midwest and northern Great Lakes, this animal has become deeply integrated into the cultural fabric of its region. Since it migrated to North America some 14,000 years ago, the moose has become vital to the sustenance and culture of American Indians in the area.

Unfortunately this charismatic cervid is in imminent risk of disappearing from a large portion of its natural range. In recent years its populations in the Midwest have plummeted — in Minnesota, over the past decade moose populations have dropped by 58 percent — and trends show that without intervention this pattern will continue. With just a few thousand moose surviving in Minnesota today, scientists warn that these animals could disappear from the state very soon.

One of the major factors in the alteration of moose habitat and survival is climate change. Due to global warming, the boreal and hardwood forests in the moose's natural range are slowly being replaced by oak forests that are less suitable for the animal. Increasing temperatures and decreasing snowfall are putting these moose at increased risk of overheating and malnutrition, as well as making them more susceptible to sickness from parasites, which are become more prevalent in the warming climate. A particularly nasty and lethal parasite to this species of moose is the meningeal worm, otherwise known as the “brain worm.” Midwestern moose are also threatened by mining.

Unfortunately at the federal level there aren't any existing regulatory mechanisms to effectively protect moose from the threats they face, and state regulations aren't much help. Michigan and Minnesota have listed moose as state “species of concern,” but this doesn't afford them any binding legal protection within the states.

To help midwestern moose win real safeguards, in 2015 the Center and Honor the Earth petitioned to list them under the Endangered Species Act. The U.S. Fish and Wildlife Service is now reviewing their status.