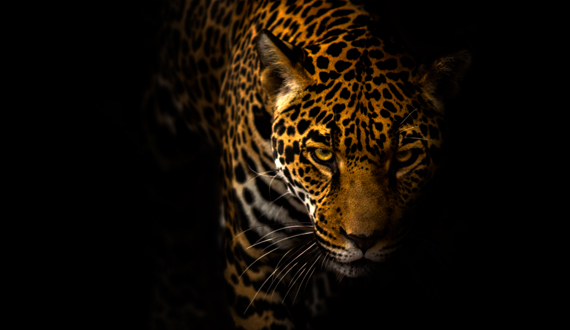 The word jaguar comes from the South American Tupi and Guarani languages. A likely origin is the word yaguareté, meaning “true, fierce beast.”

DESCRIPTION: The largest cat native to North America and the third largest in the world (after lions and tigers), the jaguar measures five to eight feet from nose to tail and weighs 140 to 300 pounds. Jaguars have brownish-yellow fur with dark rosettes. Often confused with leopards, jaguars may be distinguished by the additional marks in the center of these rosettes. Jaguars also have stockier bodies, shorter limbs, and larger paws than leopards.

RANGE: Jaguars evolved in North America, expanded into Central and South America, and then lost most of their original northern range. Jaguars in California once ranged as far north as Monterey Bay. Today, small numbers continue to live in the U.S.-Mexico borderlands.

MIGRATION: No seasonal migration is known to occur. Males disperse to set up new territories or reclaim lost habitat; females are presumed to disperse over shorter distances. Wolves can travel hundreds of miles, with territory size thought to be a function of prey density; jaguars likely have similar dynamics. In the arid Southwest, a 10-year resident jaguar appeared to have a territory of several hundred square miles.

BREEDING: Jaguars have no defined breeding season and will mate any time of year. After a gestation period of 100 days, a female will give birth to a litter of two to four cubs. A mother continues to feed her young until they are one year old, and she stays with them for an additional year. Cubs reach sexual maturity at two to four years of age.

FEEDING: An excellent swimmer and a strong climber, the jaguar will often wait in trees for its prey, relying on proximity rather than sustained speed in hunting. More than 85 species have been recorded in the jaguar's diet, including deer, javelina, desert bighorn sheep, birds, monkeys, turtles, snakes, and fish. Once they've caught their prey, jaguars pierce the skulls with their canines, demonstrating the amazing strength of their powerful jaws. Jaguars may also eat plants and fruits such as avocado.

THREATS: Habitat loss, hunting, and the federal predator-control program all continue to take their toll on jaguar populations. Deforestation is a major threat to jaguars in Central and South America, while in the northern part of their range, jaguars have been impacted more by development and hunting.

POPULATION TREND: A loosely estimated 30,000 jaguars are left in the wild today, most in the Amazon basin with perhaps 4,000 in Mexico including 50 to 100 in the province of Sonora.