GIVE TODAY
Grizzly bears are the largest omnivores in North America. During summer months they must eat enough to store the huge amounts of fat needed to support them through their long winter sleep. 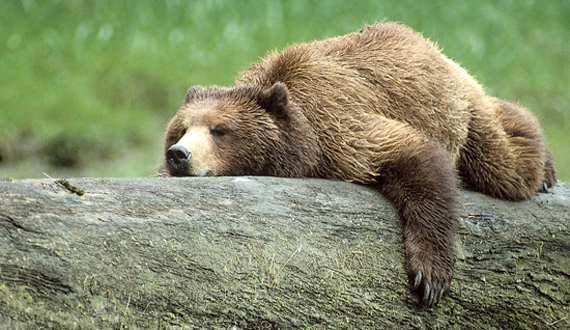 The grizzly bear is so named because its hair is grizzled, or silver tipped, yet the name is commonly believed to be derived from “grisly,” meaning “horrible.”

DESCRIPTION: A subspecies of brown bear, the grizzly bear is distinguished by its large size and a distinctive hump between the shoulders. Coloration is usually dark brown but can vary from blond to black. Adult males typically weigh from 300 to 800 pounds, while females range between 200 and 450 pounds. Some male grizzlies stand eight feet tall on their hind legs.

RANGE: Grizzly bears are found today in Alaska, Wyoming, Montana, Idaho, Washington, and possibly southern Colorado, as well as in western Canada. Historically they ranged from Alaska to Mexico and from the Pacific Ocean to the Mississippi River, but their numbers were vastly reduced by western expansion.

MIGRATION: Grizzlies hibernate rather than migrate. Males disperse to set up new territories or reclaim lost habitat; females are presumed to disperse over shorter distances. Grizzlies can travel dozens of miles; territory sizes are thought to be a function of food density.

BREEDING: Females reach sexual maturity between four and seven years of age and breed in the late spring. They delay implantation of fertilized eggs until November, enabling young to be born during the mother's winter sleep. Cubs remain with their mothers for up to four years, and females won't breed again while in the company of their young. The grizzly bear has one of the slowest reproductive rates of all North American mammals.

FEEDING: Grizzly bears are omnivores, feeding on just about anything, including insects, berries, nuts, bulbs, roots, carrion and fish. Grizzlies scavenge and hunt; they even dig to pursue subterranean mammals. For grizzlies in Canada and Alaska, salmon is an important food source. Another major food source for some grizzlies is army cutworm moths — during the summer, a grizzly in Yellowstone may consume up to 20,000 army cutworm moths a day. Grizzlies will store found carrion and cover it with grass and moss, which acts as a preservative.

THREATS: Most threats faced by the grizzly stem from habitat degradation by development, logging, road building, oil and gas drilling, livestock grazing and other resource exploitation. Grizzlies are also significantly threatened by predator control. In the Yellowstone region, a primary bear food source, the whitebark pine nut, is in decline due to pine bark beetle infestations that are exacerbated by global warming.

POPULATION TREND: Between 1850 and 1970, grizzlies were eliminated from 98 percent of their original range. Populations plummeted from an estimated high of 50,000 to between 1,500 and 1,700 today. Because of this dramatic decline, their populations in the contiguous United States were listed as threatened under the Endangered Species Act in 1975.