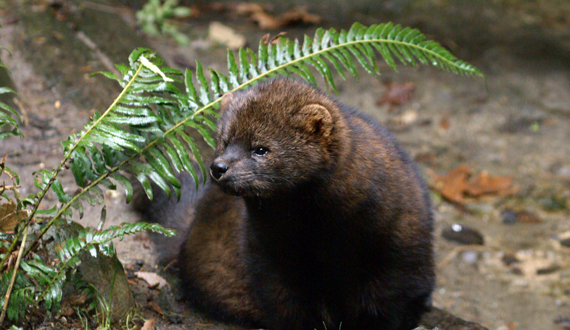 Despite its name, the fisher doesn't eat fish or live by the ocean. This shy, plush-furred member of the weasel family inhabits mature forests and munches on everything from birds to small mammals to fruit. In fact, the fisher is the only animal tough and clever enough to prey regularly on porcupines — no easy feat.

Due to historical trapping, logging and development in the West Coast's mature and old-growth forests, the Pacific fisher (the fisher's West Coast population) is now in danger of extinction. And although this secretive predator once ranged through five states, habitat loss and trapping has limited the fisher's Northern Rockies population to the border of northern Idaho and Montana. Although Pacific fisher trapping was outlawed in the 1940s, logging and development have decimated the large blocks of forest the species needs to thrive.

To help save Pacific fishers from extinction, in 2000 the Center and allies petitioned protect them under the federal Endangered Species Act. The U.S. Fish and Wildlife Service found they warranted protection in 2004, but that such protection was precluded by listing of other species.

Following further litigation, the agency proposed protection for fishers in 2014 but again reversed course in 2016, denying protection. Represented by Earthjustice, the groups sued, and the decision was remanded — resulting in the species again being proposed for protection in 2019. In 2020 the Trump administration denied Endangered Species Act protection to Pacific fishers from the central Sierra to the Canadian border but granted them endangered status in the southern Sierra Nevada. Finally, in 2021, the Service proposed to designate 554,454 acres in the southern Sierra Nevada as critical habitat for that protected population of fishers.

In 2022 the Center and allies went back to court, suing the Service for denying endangered species protection to West Coast fishers.

Check out our press releases to learn more about the Center's actions to save fishers.