Biologists have estimated that more than 170 invertebrate species are affected by the prairie dog's existence. 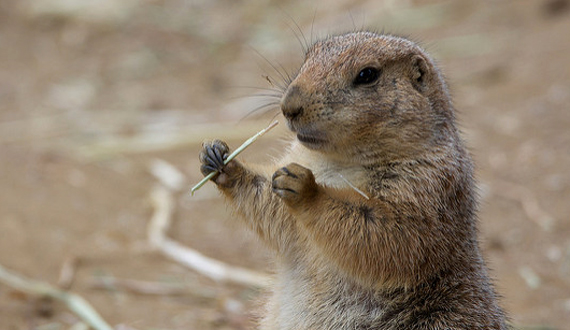 The black-tailed prairie dog is an intelligent, sociable rodent that's a keystone species in the prairie ecosystem it calls home. This precocious little mammal is perfectly suited to its environment, feeding on a variety of short grasses and flowering plants and creating complex “towns” of interconnected burrows. Prairie dogs' sociable nature allows them to form close-knit family groups and work cooperatively to warn of danger through a variety of barks. It's these calls that earned the prairie dog its name — early settlers thought they sounded like the bark of a dog.

Today, black-tailed prairie dog populations have been reduced by as much as 95 percent of their historical numbers, with populations continuing to decline. This staggering figure is the result of a concerted effort to eradicate the species, since many farmers and ranchers consider prairie dogs pests. Drastic die-offs spell big trouble not only for the prairie dogs, but also for the wide variety of animals that depend on them as a critical food source, including eagles, hawks, falcons, badgers, coyotes, snakes and ferrets.

Even as the black-tailed prairie dog is being considered for Endangered Species Act protection by the U.S. Fish and Wildlife Service, the Environmental Protection Agency is considering approving a deadly poison known as Kaput-D as a means of prairie dog control. Kaput-D causes the affected animal to lose blood through various orifices and slowly hemorrhage to death over a period of weeks. During that time, the poisoned animal is still active, spreading the poison throughout its habitat — and poisoned prairie dogs are still on predators' menu. The Center submitted comments explaining the numerous problems with Kaput-D, particularly the fact that this powerful anticoagulant would not only exterminate black-tailed prairie dogs but also poison the animals that consume them or share their habitat — including the extremely endangered black-footed ferret, the whooping crane, and a variety of other creatures. If Kaput-D is approved to kill black-tailed prairie dogs, some of America's most imperiled species could go kaput right along with them.

We're fighting many other threats to this little mammal, like habitat destruction, cruel wildlife-killing contests (banned in Colorado in 2020) and killing by the USDA's Wildlife Services program.