The black-footed ferret is the only ferret native to North America. 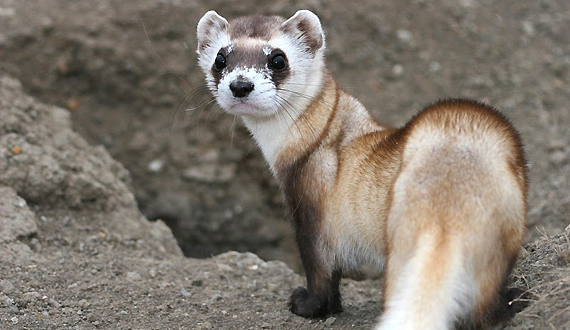 This 2-foot-long, black-masked member of the weasel family once occurred in central grasslands and basins from southern Canada to Texas but is now one of the most endangered mammals in North America. In the early 1900s, the United States was likely home to more than 5 million ferrets. But ferrets, which hunt prairie dogs for food and live in their burrows, were almost wiped out early in the 20th century after agricultural development and rodent poisons devastated prairie dog populations.

Thirteen years after they were listed as endangered in 1967, the last captive ferret died, and the animals were thought to be extinct in North America. Then in 1981 a small relict population was discovered in a Wyoming prairie dog colony. Between 1991 and 1999, ferrets from that population were released at 29 sites in Wyoming, Montana, South Dakota, Arizona and along the Utah/Colorado border. Presently, ferrets survive at 14 of those sites. Currently there are 340 black-footed ferrets in the wild and 301 in captivity.

For decades the Center has been defending this species from threats like agricultural and urban development, pesticides (particularly rodenticides), and oil and gas development such as the Keystone XL pipeline. Sadly ferrets are also among the species inadvertently killed by the USDA’s Wildlife Services program, which we’re working hard to rein in.

MEDIA
Press releases
Search our newsroom for the black-footed ferret

Watch our video on species hurt by KXL.