Preble's meadow jumping mice use their tails to communicate by making drumming noises. 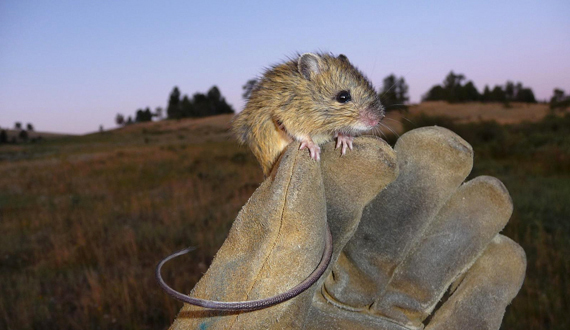 One of 12 recognized subspecies of the species Z. hudsonius, or meadow jumping mouse, the Preble's meadow jumping mouse is named after Edward A. Preble, who first encountered the species in Colorado in 1899. This small mouse has large feet, adapted for powerful, long leaps — but even its big feet can't take it away from sprawling subdivisions and spreading rangelands fast enough to ensure its survival.

A candidate species between 1985 and 1996, the Preble's was finally listed as threatened in 1998 in response to a 1994 petition from the Biodiversity Legal Foundation, which would later become part of the Center. In keeping with an agreement with the BLF, the Center, and others, the U.S. Fish and Wildlife Service proposed to designate 57,000 acres of critical habitat in 2002 — an area that was reduced to about 31,000 acres when the agency finalized its designation the next year under the influence of former corrupt Interior Department official Julie MacDonald. In August 2007, the Center submitted a notice of intent to sue the Bush administration for this illegal critical habitat designation and decisions affecting the protections of 54 other imperiled species. The Fish and Wildlife Service increased the mouse's critical habitat in 2010, but not by nearly enough.

In November 2007, under the terms of a settlement reached between the Fish and Wildlife Service and the state of Wyoming, the Service proposed removing protection from the species in the Wyoming portion of its range, where more populations have been discovered since the original listing. In the same month, after the Center submitted extensive comments on the proposal, the Service announced it would reexamine both the delisting proposal and the 2003 critical habitat designation. Then, against the recommendations of scientists, the agency delisted the Wyoming population in 2008 — so the next year, the Center and allies sued. The mouse is now once again listed in Wyoming.