GIVE TODAY
Pocket mice get their name from the external, fur-lined cheek pouches in which they carry food. 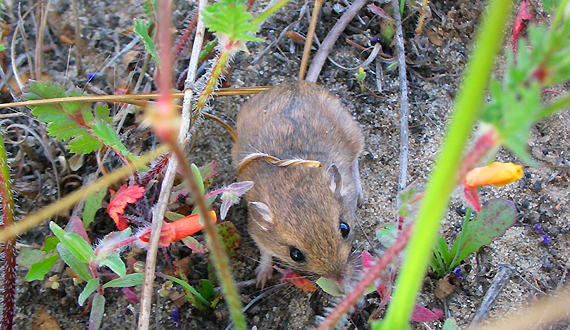 In winter, if environmental factors are unfavorable, the Pacific pocket mouse may hibernate underground until spring brings better conditions. But if adequate food supplies are available, the mouse will remain active during winter. Currently, habitat destruction due to urban expansion, road construction and agriculture poses the greatest threat to this critically imperiled mouse. Without sufficient habitat, the Pacific pocket mouse is left with nowhere to hide during the hard winters.

The Center is working to secure this habitat. In 1998, when the U.S. Marines persisted with construction activities in known Pacific pocket mouse habitat, the Center gave notice of intent to sue Camp Pendleton unless the Marines first consulted with Fish and Wildlife. And in 2000, the Center, Endangered Habitats League, and the National Resources Defense Council petitioned the Service to map out and protect critical habitat areas for the pocket mouse.