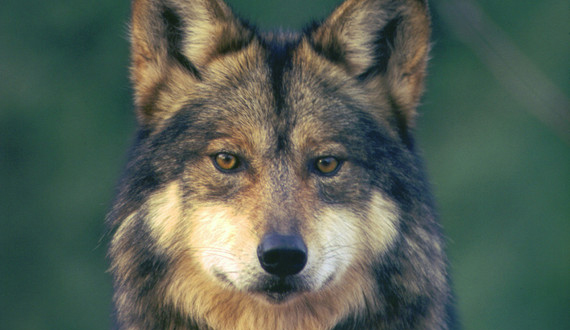 The smallest gray wolf subspecies in North America, the Mexican gray wolf is also one of the rarest and most imperiled mammals on the continent. The U.S. Fish and Wildlife Service (and its predecessor agency) poisoned and trapped almost all Mexican wolves from the wild from 1915 until 1973; the last five survivors, captured between 1977 and 1980, were bred in captivity and their descendants reintroduced in 1998.

At the end of 2019, just 163 Mexican gray wolves were counted in the wild in Arizona and New Mexico. Thankfully that’s a 24% increase — but these wolves are losing genetic diversity and still need much more help.

Wolves are being persecuted and neglected by the U.S. federal government.
Please act now in telling the U.S. Fish and Wildlife Service to protect these noble, iconic animals.

Beginning in 1915 the federal government trapped and poisoned wolves, and destroyed pups in their dens, on behalf of the livestock industry. By the 1930s wolves were almost completely absent from the West, and wolves entering from Mexico were quickly killed. In 1950 the Fish and Wildlife Service began sending poison to Mexico, along with staff to set up a wolf-poisoning program, as a form of foreign aid.

After the Endangered Species Act was passed in 1973 and the Mexican wolf added to the endangered list in 1976, just seven wolves — three captured from the wild and four already in captivity — proved the foundation for captive breeding; no wolves were confirmed in the wild in Mexico after the last of the seven was captured alive in 1980.

Reintroduction began in 1998 in Arizona and New Mexico, and in 2011 in Sonora, Mexico, where approximately 30 wolves now live.

The Center has worked continuously to recover Mexican wolves in the wild, beginning with a 1990 lawsuit that led, eight years later, to reintroduction. Along the way we’ve sought to protect the wolves from persecution. We’ve also focused on bolstering their declining genetic diversity, pushing for wolf releases in places and circumstances where they can thrive. Early on we helped defeat two livestock-industry lawsuits as well as legislation to remove wolves from the wild. We induced the government to rerelease trapped wolves into New Mexico beginning in 2000. Our legally binding 2009 agreement with the Fish and Wildlife Service threw out a policy that drove the trapping and shooting of wolves based on an arbitrary and inhumane formula that ignored their genetic value and family roles, such as caring for pups.

Our 2004 petition and subsequent lawsuits led to a 2015 management rule authorizing, for the first time, the releases of captive-born wolves in New Mexico — and vastly expanding where they can roam and live in both New Mexico and Arizona. Our sweeping 2018 court victory repudiating the Fish and Wildlife Service’s mismanagement of the population has led to an ongoing rewrite of the 2015 management rule, which must be finalized by May 17, 2021. The Center sent detailed, science-based comments in the initial scoping period for this rewrite, seeking to greatly constrain the removal of wolves from the wild and resume the releases of family packs of wolves. Family releases are the most effective way to release these social animals, but the practice was ended after 2006 due to pressure from the livestock industry.

The Center’s petitions and litigation led also to the Mexican wolf gaining its own place on the endangered list, separate from other gray wolves, in 2015, and the related development of a Mexican wolf recovery plan in 2017.  The recovery plan should be a road map for recovery but was politicized to dampen wolf releases, restrict where wolves can be recovered, and remove them from protection with too few on the ground and with their genetic plight still dire. So the Center is currently in court seeking to compel a rewrite.

Through our work we've educated thousands of people about the crucial ecological role of wolves and rallied the public to oppose the policies leading to ongoing government shooting and trapping of Mexican wolves, and to support wolf releases. To spur true recovery for all gray wolves, the Center filed a scientific petition and notice of intent to sue to compel the federal government to develop a national recovery plan that would establish wolf populations in suitable habitat in the Pacific Northwest, California, southern Rockies, New England and Colorado Plateau.