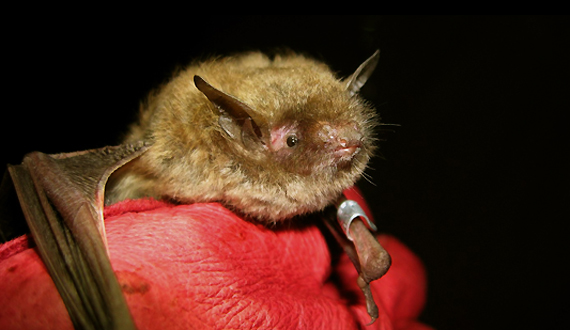 White-nose syndrome is considered the worst wildlife disease outbreak in North American history. Visit our Save Our Bats website now to learn more and help us save bats across the country.

Every fall, Indiana bats gather in swarms at chosen hibernating spots to mate, swooping in and out of caves from dusk till dawn. Some humans might find this a frightening sight, but in fact bats are shy, sensitive and vulnerable animals — and the Indiana bat is one of the rarest and most sensitive of its kind.

The species' long-term decline began in the early 1800s as its wintering sites (hibernacula) were disturbed by mining, tourism and other activities. In the decades since, habit loss has continued to threaten these bats. In 1967, in recognition of Indiana bats' declining status, the U.S. Fish and Wildlife Service listed them as endangered. Then in 2007 a perplexing and deadly new threat to bats, a fungal disease called white-nose syndrome, appeared in the Northeast and began killing hundreds of thousands of bats across the country, including Indiana bats. If this species' habitat is not better protected from the many factors that threaten it, and if white-nose syndrome continues to decimate bat populations, it's quite possible that we'll witness the extinction of the Indiana bat.

Closure of caves to human activity and other protective measures for hibernacula both preserve Indiana bats' habitat and help prevent the spread of white-nose syndrom -- and the Center has made crucial progress in this area. After our January 2008 request, the Forest Service closed all caves and abandoned mines in 33 eastern and southern states. In 2009, after we joined with allies to file a protest against a plan to auction off oil and gas leases in a portion of West Virginia's Monongahela National Forest — just a few miles away from a major hibernating site for Virginia big-eared and Indiana bats — the Bureau withdrew the area from the lease sale. In 2010, after our petition, the Service announced closure of caves and mines in the national refuge system.

We also work to fight white-nose syndrome directly. Learn more about our coordinated efforts to fight this deadly bat disease.