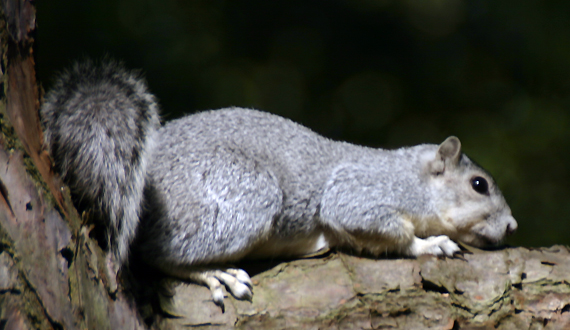 The Delmarva Peninsula fox squirrel is the largest variety of tree squirrel in North America — with about half its length taken up by its long, exceedingly fluffy tail. Unlike the chattering, scampering gray squirrel, it's quiet, shy and not quite agile enough to jump from tree to tree. The Delmarva fox squirrel is also very difficult to spot — no small thanks to the fact that it's seriously endangered by logging, development, agriculture, road construction, sea-level rise and more.

Since the Delmarva Peninsula fox squirrel was listed under the Endangered Species Act back in 1967 — when only 10 percent of its historical population remained on Earth — translocations, habitat protection and other measures have helped it bounce back from the very brink of extinction. This squirrel also faces loss of habitat due to sea-level rise resulting from global climate change. Portions of its currently occupied habitat are projected to be inundated by sea-level rise over the next 50 years. Given the specific habitat needs of the squirrel and the limited available habitat, this loss of habitat poses a serious threat.

But the timid, vulnerable mammal is still jeopardized by the same threats, and new ones pop up all the time — like a military training facility recently proposed for the middle of its Maryland habitat. After the Center announced our intent to sue over the facility to protect the squirrel, the federal government scrapped its plans for the project in the summer of 2010.

Despite the ongoing threats to these squirrels, in 2014 they were declared "recovered" by Interior Secretary Sally Jewell and lost Endangered Species Act protections.