The Quino checkerspot tends to avoid flying over objects taller than six to eight feet. 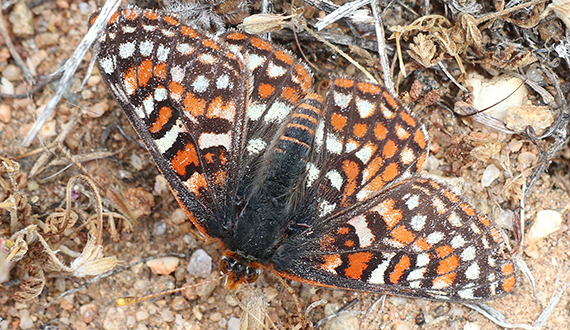 The plight of the Quino checkerspot butterfly has been described by a biologist as “four engines out and about 10 seconds to impact.” The Quino checkerspot was once one of the most common butterflies in Southern California: At the beginning of the 20th century, millions of these orange-and-black butterflies could be seen each year in a swath extending from the Santa Monica Mountains to Baja California. But with suitable habitat now disappearing at breakneck speed, it will take all we can do to prevent this low-flying flutterer from crashing.

The Quino checkerspot butterfly was federally listed as an endangered species in 1997 in response to a petition and lawsuit by the Center. In response to another Center lawsuit, 171,605 acres of critical habitat were designated for the butterfly in Riverside and San Diego counties in 2002. However, the designation included little more than half the area of the 301,010 acres originally proposed for protection. Made under the influence of disgraced former Interior Department official Julie MacDonald, this decision contradicted the species' recovery plan and failed to designate areas known to be essential for the survival of the species.

In 2007 the Center challenged the butterfly's inadequate critical habitat designation — along with wrongful federal Endangered Species Act decisions made for 54 other species — by submitting a notice of intent to sue the Bush administration for failing to give imperiled species the protections they need to survive. But in 2009 the U.S. Fish and Wildlife Service actually cut the butterfly's existing inadequate critical habitat by 60 percent, leaving it with just 62, 125 acres.

The butterfly could get additional help if listed under California's state Endangered Species Act. So in 2020 the Center petitioned for state safeguards.

We're also working to protect Quino checkerspot habitat on public lands in Southern California's national forests. In 2000, the Center reached a landmark legal agreement with the Forest Service to protect more than 50 endangered species in these forests, including the Quino checkerspot. In 2001, the Center submitted a comprehensive conservation plan for the four southern California national forests that would enhance protections for listed species, including protecting habitat for the Quino checkerspot; we're challenging forest management plans that would allow more environmental damage and harm numerous listed species.