Tiger beetles are ferocious and agile predators that seize their small prey with powerful sickle-shaped jaws. 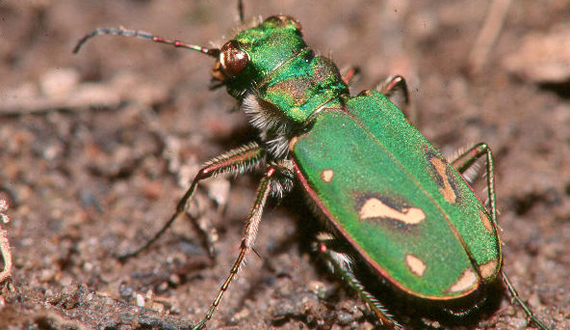 The Ohlone tiger beetle is a colorful, predatory, and endangered insect endemic to Santa Cruz County, California. Adult tiger beetles are ferocious and agile predators that seize their small prey with powerful sickle-shaped jaws. These beetles require specific habitat conditions in loamy soils within native grasslands of the rare coastal terrace prairie — sites often sought after by developers for building homes with views of the Pacific Ocean.

After the U.S. Fish and Wildlife Service failed to protect the Ohlone tiger beetle despite two listing petitions detailing its tiny range and the increasing threats to the species, a Center lawsuit and legal agreement resulted in an endangered listing in 2001. The Center also worked to protect critical beetle habitat in Scotts Valley from being destroyed by the Glenwood development. Our pesticide report Silent Spring Revisited details the threat to the species that’s posed by pesticides from urban runoff.