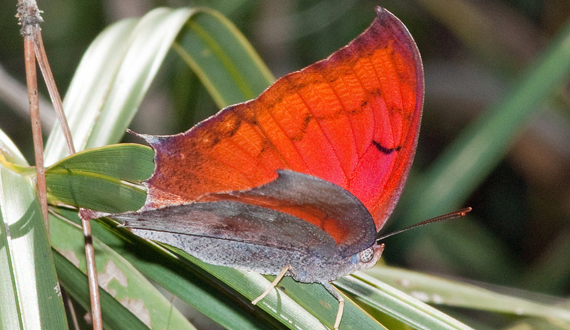 Its flashy red or orange wings make the Florida leafwing butterfly easy to spot in flight, but it gets its name from the tricks of camouflage that allow the brown or gray underside of its wings — which show when it's at rest — to make it look a bit like a dead leaf, effective camouflage in its pine rockland habitat in South Florida.

This butterfly, whose only known host plant is the pineland croton, reaches adult sizes of 2.75 to 3 inches and displays sexual dimorphism, which means that the bodies of the females and males are different; in this case, female butterflies are slightly larger than males. Although the Florida leafwing can be spotted in all months, the butterfly's coloring varies from season to season and is brightest during the summer.

Though it was once abundant throughout Miami-Dade and Monroe counties, the Florida leafwing butterfly is thought to currently only occupy Everglades National Park. The exact reasons for its population decline are unknown, but its biggest threats most likely include habitat destruction, nonnative species introduction, insecticide use and butterfly collecting. Its South Florida habitat is also threatened by sea-level rise.

Luckily for the Florida leafwing, it's one of the numerous species that has benefitted from our 2011 agreement with the Fish and Wildlife Service pushing the agency forward on Endangered Species Act decisions for 757 plants and animals. Following that settlement this plant was federally protected in 2014.