This beetle can sniff out a freshly dead animal from up to two miles away. 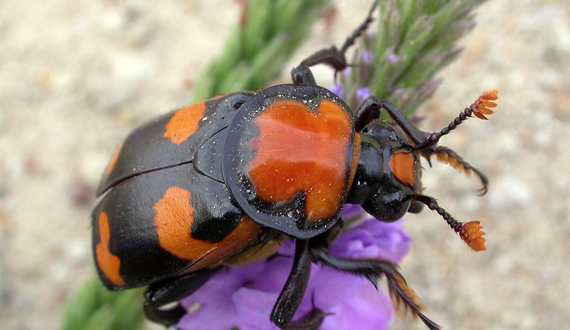 While this beetle's nesting ritual is a little on the noir side, it's also critical to the function of the ecosystems it inhabits. The American burying beetle is one of nature's most efficient recyclers, feeding and sheltering its own brood while simultaneously returning nutrients to the earth to nourish vegetation and keeping ant and fly populations in check. Unfortunately, the beetle's own populations — which once flourished in 35 U.S. states, plus parts of Canada — were in dramatic decline throughout most of the 20th century due to a complex list of threats, with habitat loss, pesticides and disease likely topping it.

The American burying beetle began to bounce back from near-extinction after it was protected under the Endangered Species Act. It grew from just one known population at the time of its listing in 1989 to six native and introduced populations. Aside from monitoring the beetle's situation and defending its habitat in general, the Center has been working hard to stop the proposed Keystone XL pipeline, which would've devastated some of this creature's last remaining habitat (as well as habitat for many other rare species, like prairie dogs, whose carcasses are prime burying-beetle sustenance).

Shockingly, despite its absence from most of its range — plus ongoing habitat destruction from the oil and gas industry and new information that climate change is decimating the species in the southern Plains — in 2020 the Trump administration downlisted the American burying beetle from "endangered" to "threatened" status. The downlisting rule also outlines exclusions that allow oil and gas companies to pursue developments within the beetle’s fragile habitat in Oklahoma.