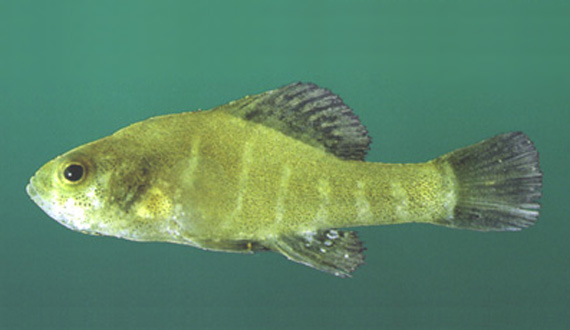 The spring pygmy sunfish has been teetering on the brink of extinction for the 70-plus years it's been known to science. Existing only in one spring complex in the Tennessee River watershed in Alabama, the spring pygmy relies on the dense underwater vegetation found in spring pools both for shelter and as hunting grounds for the drifting insects and snails that are its prey. Unfortunately this tiny fish's habitat is rapidly changing — and in some cases, disappearing — due to development.

The spring pygmy has already twice been thought extinct since it was first discovered in 1937. While always a rare fish, the spring pygmy was once found in three spring complexes — by now it's been extirpated from two of them. Attempts to reintroduce a population into a tiny waterway called Pryor Spring were initially successful, but eventually the combined influence of dredging and agricultural runoff eradicated that population yet again. This fish is now limited to just one population living in a five-mile stretch of Beaverdam Creek.

The spring pygmy sunfish faces a long list of specific threats, including degradation of water quality, reduction of water quantity, and pollution in the form of pesticide and agricultural runoff. Developing the species' last refuge would quite likely prove to be its undoing.

The Center has been fighting to save the spring pygmy since 2009, when we filed a scientific petition seeking its emergency protection under the Endangered Species Act. We didn't stop working for that protection until it was granted in 2012.

When the U.S. Fish and Wildlife Service still hadn't responded to our petition in 2011, we filed a notice of intent to sue that prompted the agency's announcement that it warranted protection. The next year we reached a landmark agreement compelling the Service to make a listing proposal by 2012, as well as move forward in the protection process for 756 other species.

We're still fighting for this fascinating fish — and winning — including by saving some of its last habitat from an automobile-manufacturing plant in Alabama.

The Endangered Species Act — which the sunfish depends on — is under attack.
Please act now: Tell Congresss to defend this crucial law.