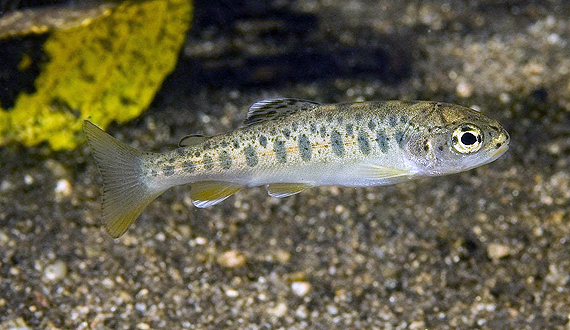 Steelhead are a unique form of rainbow trout. Like salmon, they spent most of their adult lives in the ocean, but spawn in freshwater streams and rivers. Southern steelhead are survivors, adapted to seasonally dry streams in the arid climate at the extreme southern end of the steelhead range. Tens of thousands of these prized sport fish used to return to Southern California streams every year, but now they're stopped by dams and water diversions, urban development, and livestock grazing. These impacts have decimated southern steelhead runs, and today only a few hundred of the iridescent fish make their yearly spawning pilgrimage.

The National Marine Fisheries Service listed the southern steelhead as an endangered species in 1997, but arbitrarily excluded from the listing any steelhead found south of Malibu Creek, Los Angeles County, and upstream of several dams. In so doing, the agency disregarded the recommendations of its own scientists, who pointed out the importance of habitat above the dams and of the historic distribution of the species at least as far south as the Mexican border.

The Center and a coalition of fishing and environmental groups worked to improve protections for the southernmost population of steelhead, filing a lawsuit in 2000 and threatening another lawsuit in 2002 over the inadequate listing. After steelhead were discovered in San Mateo Creek in 2002, on the border of Orange and San Diego counties and south of the listed range of the species, the Fisheries Service extended the endangered listing into Los Angeles, Orange, and San Diego counties. The Service reaffirmed the endangered status of southern steelhead in 2005, but after proposing to include resident rainbow and steelhead trout landlocked above dams in the listing, it arbitrarily excluded resident and juvenile fish from the listed populations.

The Center has been working hard to secure legal protections for streams essential to the survival and recovery of southern steelhead. When the Fisheries Service ignored its duty to designate critical habitat for the fish, a Center lawsuit helped prompt that designation; but those protections were withdrawn in 2002 when the Bush administration refused to defend the Fisheries Service against a lawsuit brought by the National Association of Home Builders. The Fisheries Service only agreed to consider re-establishing the habitat protections in response to a lawsuit by a coalition of environmental and fishing groups, including the Center. The 2005 critical habitat designation reduced proposed protections by 80 percent and excluded important floodplain forests and areas above dams.

In 2003, the Center submitted a comprehensive conservation alternative for the four Southern California national forests, which would protect stream habitat for southern steelhead trout. We're challenging the Forest Service's management plans for these forests — plans that would allow more environmental damage and would harm trout habitat. The Center also settled a lawsuit against the Forest Service in 2002, with an agreement that required the agency to complete comprehensive management plans for 80 miles of rivers and put interim conservation measures in place. We've worked particularly hard for the protection of steelhead streams along the Big Sur coast in Los Padres National Forest — since 2001, we've filed numerous appeals and threatened legal actions to rein in inappropriate and illegal livestock grazing on public forest land in Big Sur, forcing the Forest Service to suspend grazing on thousands of acres and to refrain from increasing grazing on eight federal allotments.

In 2016, we and other conservation groups filed a lawsuit in federal court against United Water Conservation District over its operation of a dam that blocks runs of endangered steelhead on the Santa Clara River.