Spotted owl calls sound like a small dog barking; this bold sound in the forest often betrays their location. 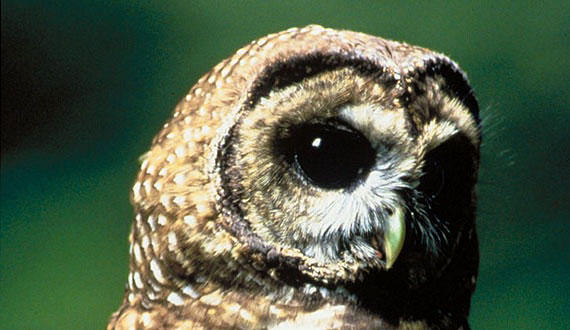 A popular symbol of the decline of Northwest forests, the medium-sized, chocolatey-brown northern spotted owl depends on the old-growth forests that once stretched in an unbroken ribbon from Alaska to California — forests that are now a ghostly memory of their former selves. As an avian icon, curious and vocal, this owl is an excellent indicator of the health of these forests and the hundreds of species that depend on them.

Although northern spotted owl populations have continued to drop, the Bush administration ramped up attacks on the owl by releasing a recovery plan that proposed less habitat protection than the science-based Northwest Forest Plan, as well as by slashing more than a million acres of critical habitat for the owl. To top it off, Bush and company crafted a plan to remove large areas in southwestern Oregon from the Northwest Forest Plan, resulting in a nearly fourfold increase in logging that includes remaining old-growth forests.

The Center has been there at every twist and turn, submitting comments in opposition to the Western Oregon Plan Revision and intervening in a timber-industry lawsuit that sought a  reduction of the owl's critical habitat — after it had already been reduced by almost 1.6 million acres in 2008. After a Center lawsuit, that critical habitat area was increased to 9.6 million acres. We also took the U.S. Fish and Wildlife Service to court over an Oregon Department of Forestry logging plan in the Elliott State Forest, an area that provides crucial habitat for the northern spotted owl in the logging-devastated Oregon Coast Range.

In 2021 the Center and allies in the Pacific Northwest filed a lawsuit to reinstate federal protections on more than 3.4 million acres of federal old-growth forests, essential habitat for the northern spotted owl. The lawsuit asks the court to reject a rule issued in the last days of the Trump administration that eliminated one-third of the species' critical habitat protections.