A group of these birds is known as a "pack" or "little house" of prairie chickens. 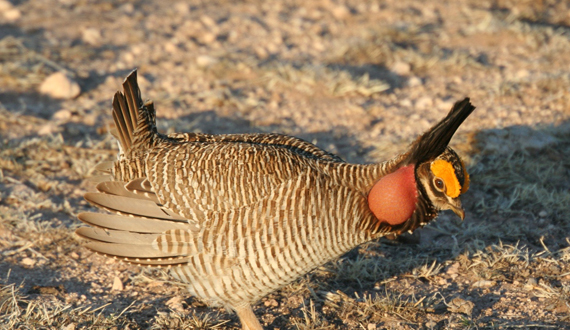 The rare dancing grouse of the Southwest, called the lesser prairie chicken, is known for the males' elaborate calls and showy displays of reddish-orange air sacs while they perform mating dances on “booming grounds” in the spring. These birds need large, unfragmented parcels of intact native grasslands to maintain self-sustaining populations. They once roamed the sagebrush and shinnery oak of the southern Great Plains by the millions, but today occupy just a fraction of their historic range.

In 2012 the lesser prairie chicken population bottomed out at 35,000 individuals — until it reached a new low of only about 17,616 birds the very next year, a massive decline of about 50 percent. The bird's numbers rebounded in 2014 and 2015 after the end of a drought in its range, but biologists are worried about another population decline, even with adequate rainfall.

The main threats facing lesser prairie chickens are habitat loss and degradation from livestock grazing, agriculture, oil and gas extraction, herbicides, mining and roads, and wind-energy production. The birds' habitat is also lost to fences, power lines and other tall structures that beckon predators to perch — prairie chickens won't set foot within a mile of them.

Lesser prairie chickens have danced a long, hard road in their journey toward gaining — and keeping — the federal protections they need to survive.

The Center has been working for these fascinating birds for decades. In 1995 we and allies petitioned to protect them under the Endangered Species Act; nearly three years later, the U.S. Fish and Wildlife Service said the birds deserved protection — but instead of granting it, the agency merely added the animals to the “candidate list.” Finally, thanks to the Center's 2011 landmark agreement on 757 species, the Service officially protected lesser prairie chickens as threatened in 2014 — only to snatch that protection away two years later in response to a lawsuit from a Texas oil trade group. And that was after the agency itself admitted in court that the loss of even a small amount of suitable habitat could send the species into a "death spiral."

The Service is now undergoing a new review of the lesser prairie chicken's status as the bird waits, unprotected, for a new Endangered Species Act decision.