GIVE TODAY
The Bell's vireo has not been observed drinking water and obtains all that it needs from its food. 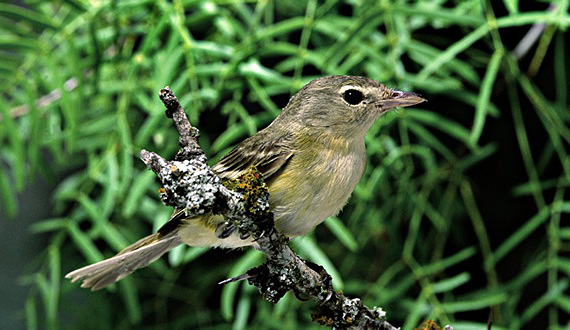 A shy, secretive, and silver-tongued songbird, the tenacious least Bell's vireo has been to the brink of extinction and back in recent decades. Although it is federally protected and there has been an important surge in the least Bell's vireo population in Southern California, the bird remains susceptible to habitat destruction from the likes of urban development, overgrazing, and electric power lines. The Center's extensive work to protect the least Bell's vireo and its habitat by opposing harmful projects has been ongoing for more than a decade.

In response to a Center lawsuit, in spring 2008 the Army Corps of Engineers revoked authorization to begin work on the ill-conceived Shadowrock luxury hotel and golf development in Chino Canyon, California — important least Bell's vireo habitat. We continue to battle huge developments on the Santa Clara River that would eliminate riparian habitat essential for least Bell's vireo recovery, including the Newhall Ranch project in Los Angeles County. And we work to stop harmful transmission-line projects like the Sunrise Powerlink from degrading the bird's habitat and increasing the risk of fire in delicate California ecosystems.

Ever since we filed a lawsuit to stop Steven Spielberg from building a massive development, DreamWorks Playa Vista, on one of Los Angeles' last remaining wetlands, we've recognized that the conservation of riparian areas is critical to the survival of the least Bell's vireo. DreamWorks didn't end up building its massive studio — and the Center will make sure the vireo doesn't fall prey to other projects popping up in its home.