The black-capped petrel makes a flute-like sound during its nocturnal flights, produced as wind passes over its wings. 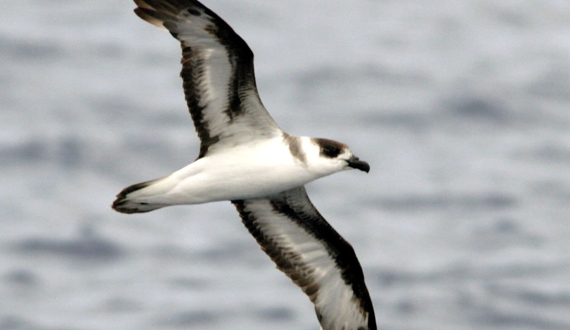 The black-capped petrel is a small seabird with long, black-framed wings that is also known as diablotin, or “little devil,” due to its eerie nighttime mating calls. These birds nest in the Caribbean Islands, where breeding females lay a solitary egg in crevices within steep forest cliffs. But they spend most of their time on the open sea, foraging in deep waters along the Gulf Stream from North Carolina to Florida.

The black-capped petrel was thought to be extinct for decades, the victim of overhunting, habitat degradation and the introduction of mongooses and rats into breeding areas. But it was rediscovered in 1963, when researchers identified 13 breeding colonies in the high mountains of Hispaniola. Recent studies have tracked black-capped petrels from the coasts of Colombia and Panama to the outer continental shelf off of Virginia, traveling as far as 420 miles in a single day.

Yet black-capped petrels face new threats along the Atlantic coast, where the White House has proposed offshore oil drilling. Oil spills are particularly dangerous for this nocturnal seabird, which is attracted to oily surfaces as it feeds and forages. Compounding the government's action on new oil leases has been its inaction on protecting this highly vulnerable seabird. Although the International Union for the Conservation of Nature considers black-capped petrels to be an endangered species, the U.S. Fish and Wildlife Service didn't protect the bird at all until 2018, after the Center sued in 2015 to defend the bird. When the Service finally proposed protections, though, it was only to list it as "threatened," with a legal loophole exempting major threats from offshore oil exploration.

MEDIA
Press releases
Search our newsroom for the black-capped petrel