In 2007, the National Audubon Society named the ashy storm patrel as one of the top 20 imperiled birds in the United States. 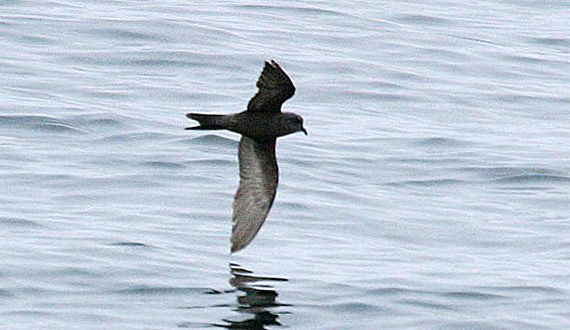 Under cover of darkness, a new ashy storm petrel parent picks up small prey brought to the ocean's surface by the California current. Feeding and fledging of chicks is synchronized with the moon cycles. The blackness of night during the new moon hides the nocturnal petrel's comings and goings from its burrow, providing protection from would-be predators.

But increasingly, the bright lights widely cast by commercial fishing vessels and offshore oil and gas operations are throwing this seabird's natural rhythm out of balance, compounding the harmful effects of rising ocean temperatures and acidification. The survival of the species is precarious and requires rapid action. With an extremely limited range and a very small population size, ashy storm petrels need the protection of the Endangered Species Act to ward off the many imposing dangers the seabirds face.

But it was denied that protection in 2013, in response to a petition by the Center to list the seabird as federally endangered in 2007. After we filed a notice of intent to sue the U.S. Fish and Wildlife Service for not responding to our petition, in May 2008 the Service announced it was launching a full status review to determine whether this unique California seabird warrants Endangered Species Act protection. After more than a year and another Center suit, in August 2009 the agency announced it would not protect the bird, despite science clearly showing its endangerment — so the Center went back to court the next year. In 2011, we reached a landmark agreement with the Fish and Wildlife Service that would compel the agency to propose the species for protection by 2013 if protection was found warranted — along with making listing decisions for 756 other imperiled animals and plants. Though the agency came through on its promise, the storm petrel is still imperiled — and the Center will continue to fight to protect it.