The rare Okinawa woodpecker lives only in the northern jungles on the island of Okinawa, Japan, where it's an ecological and cultural icon. 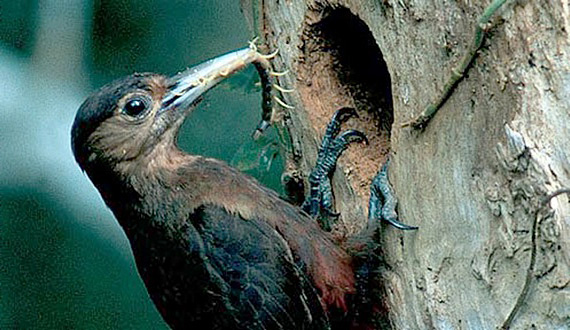 The rare Okinawa woodpecker lives only in the northern jungles on the island of Okinawa, Japan, where it's an ecological and cultural icon. The few remaining pairs of woodpeckers are on the brink of extinction, primarily due to the ongoing destruction of their forest habitat. One of the most urgent threats to the species is a proposal to clear prime woodpecker habitat for a joint U.S. and Japanese military training base.

The Center is fighting to gain Endangered Species Act protections for this critically endangered bird. The species has languished on the U.S. Fish and Wildlife Service's candidate list for more than a quarter-century, and the Center has filed two lawsuits to get the agency to take real action for the bird. We're also defending Okinawa's globally unique, ecologically significant Yanbaru forest from a U.S. military proposal to cut new helicopter landing pads and roads into the forest, threatening essential habitat for the Okinawa woodpecker.