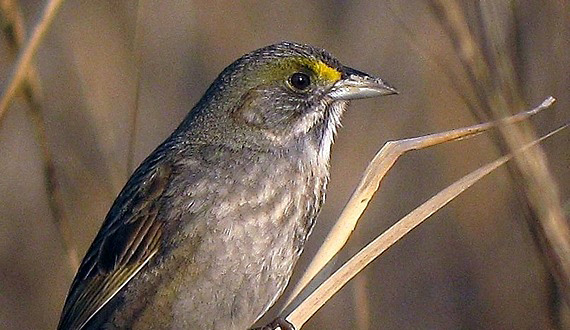 A true connoisseur of coastal living, MacGillivray's seaside sparrow spends its days munching on tiny crabs, insects and seeds in Atlantic coastal marshes. This little gray-brown bird — one of four subspecies of seaside sparrows — is especially fond of brackish water and generally spends winters in the high-salinity marshes near offshore islands in its range from northeastern Florida to North Carolina. In spring and early summer, it heads into wetlands for nesting and returns to saltier environments when chicks are able to fly.

Having outlived its now-extinct cousin the dusky seaside sparrow, the MacGillivray's seaside sparrow faces similar threats that harm its other cousin, the imperiled Cape Sable seaside sparrow, which was protected under the Endangered Species Act back when the law was passed. But since the MacGillivray's seaside sparrow didn't receive this lifesaving honor, in 2010 the Center petitioned to protect the bird and 403 other imperiled Southeast species. The next year the sparrow was included in the Center's historic agreement with the U.S. Fish and Wildlife Service to fast track listing decisions for 757 at-risk species.

But the Service still hasn't moved forward on protecting MacGillivray's seaside sparrows, which are now plagued by one of the scariest threats yet: sea-level rise caused by global warming that's rapidly melting our Arctic ice caps and land subsidence. In fact climate change is expected to raise sea levels by as much as 3 to 9 feet during this century, which would destroy the sparrow's breeding and foraging habitats near the coast. In May 2013, when the feds had failed to issue a 12-month finding on the status of MacGillivray's seaside sparrow, the Center filed a notice of intent to sue — and a few months later, the agency agreed to make a decision on protection by 2018.