The Cape Sable sparrow is the only bird restricted entirely to the Everglades system. 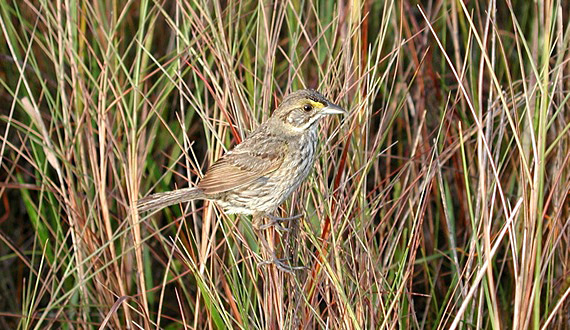 The Cape Sable seaside sparrow isn't nicknamed the “Goldilocks bird” for nothing: In order for this little sparrow to survive, its habitat conditions have to be just right. Though the bird has evolved to live in harmony with periodic fires and flooding, fires must be timed perfectly or else they'll threaten reproduction, and water levels must always be at an ideal level — or male birds will stop singing. Unfortunately, this sparrow's habitat in south Florida's Everglades system has been the target of drastic water-level manipulation that has been devastating to the bird's population, and strong storms — like Hurricane Andrew in 1992 — have posed further serious setbacks, in addition to development, pollution, and other threats.

The U.S. Fish and Wildlife Service has recognized this bird as endangered since 1967, designating more than 190,000 acres of much-needed federally protected habitat 10 years later. Although this designation included a large area, scientists quickly realized that it didn't include the right areas and called for a new designation in the species' recovery plan. After the Service failed to take action, the Biodiversity Legal Foundation, since incorporated by the Center, petitioned and sued to have the designation updated. Unfortunately this update fell to the Bush administration, which slashed critical habitat to a mere 84,000 acres, leaving out more than 70,000 acres that had been identified as essential by the agency's own scientists. To fight this political interference, in 2009 the Center filed suit against the Service to regain 70,000 acres of protected habitat. We're also making sure protected habitat is suitable for the bird, filing suit in 2015 over continued flooding of its home in the Everglades National Park.

In a 2018 Center analysis, we found that under the Trump administration the Service failed to make protection and critical-habitat decisions for 78 species, including the Cape Sable seaside sparrow, covered under a seven-year workplan developed by the agency in 2016.