The Hawaiian petrel is an endangered seabird that resides in the central subtropical Pacific Ocean and is known to breed only within the major Hawaiian Islands. 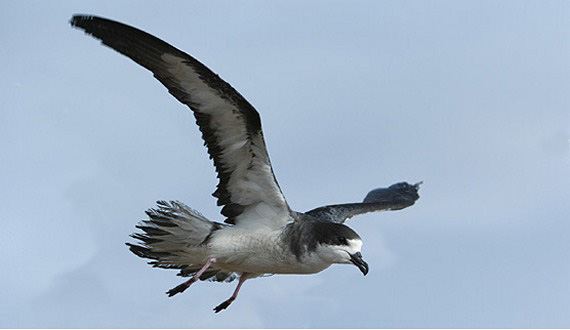 The Hawaiian petrel is an endangered seabird that resides in the central subtropical Pacific Ocean and is known to breed only within the major Hawaiian Islands. This mysterious, rarely seen petrel is among the ocean's most wide-ranging marine species. Locally known as ‘ua‘u for its haunting, nocturnal call, the bird is an attractive, large, dark gray-brown and white petrel, easily distinguished by its prominent black hood and striking white forehead. While at one time this petrel’s nesting grounds ranged throughout the Hawaiian Islands, threats to its nesting habitat have restricted it to five high-elevation locations, two of which are in jeopardy. The species’ limited distribution and decline primarily result from predation by introduced mammals and urbanization.

The Hawaiian petrel is on a collision course with human development. During the fledging season in Kauai, critically imperiled Hawaiian petrels heading to sea are attracted to bright lights in and around the lights of luxury resorts, which are situated on coastal bluffs on the North Shore of Kauai, an important seabird flyway. Trapped in the lights’ glare, the confused birds circle repeatedly until they fall to the ground from exhaustion or strike the resort’s buildings. Light pollution from resorts is the leading cause of deaths and injuries of imperiled seabirds in Kauai, while bird collisions with power lines are another cause of mortality — and the Center is working hard to save them from both threats.

In 2010, the Center and allies filed notice of intent to sue the St. Regis Princeville Resort — as well as taking on the Kaua’i Island Utility in court. The next year, the U.S. Fish and Wildlife Service issued a permit detailing the actions the utility must take to reduce the number of imperiled seabirds it kills and injures each year and to offset unavoidable harm.

Ever since then, we've been in and out of court defending the Hawaiian petrel, Newell's shearwater and other rare Hawaiian seabirds from being hurt and killed because of bright lights and other infrastructure.

MEDIA
Search our press releases to learn about the Center's work to save the Hawaiian petrel.