The Cauca guan is a rare forest bird found only on the west slopes of the west and central Andes of Colombia. 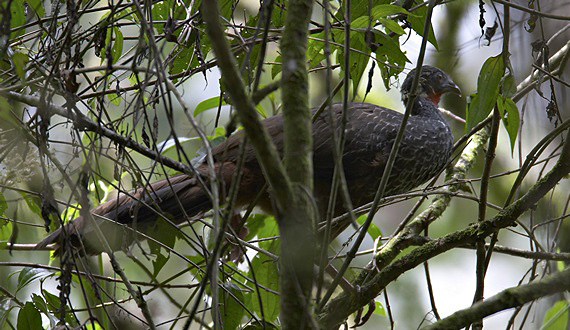 The Cauca guan is a rare forest bird found only on the west slopes of the west and central Andes of Colombia. This large, mainly brown-gray bird is similar in appearance to a turkey, thanks to its thin neck and small head with a dewlap — a flap of skin that hangs beneath the lower jaw or neck. The Cauca guan requires large territories for foraging, but today it's relegated mainly to small patches of forest, since most of its preferred dry-forest habitat has been eliminated and is highly fragmented. The species' range has been reduced by 95 percent since the1950s as a result of agriculture production and human settlement. Historically, this magnificent bird was considered common; now, only 250 to 999 individuals are in existence.

In 1980 the International Council for Bird Preservation petitioned the U.S. Fish and Wildlife Service to list the Cauca guan under the Endangered Species Act. Finally, after 33 years and extensive Center legal involvement, in 2013 the Service listed the Cauca guan as endangered.

MEDIA
Press releases
Search our newsroom for the Cauca guan